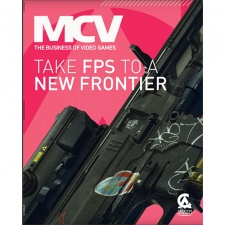 We might have a better idea about what Creative Assembly's next big project is.

The British studio has been staffing up for its "biggest multi-platform game yet" for some time, but we haven't known much about this. But thanks to an advertising cover wrap on UK games trade publication MCV, we now know that this is likely a first-person shooter.

The ad reads "Take FPS to the new frontier". This could be 'frames per second' but there's also the presence of a massive gun which makes it being a shooter a tad more likely. In addition, 'new frontier' in combination with a series of names and what looks like coordinates on the back - as well as a planet-like graphic - means it's likely this is set in space. Whether these names are planets or characters is unclear.

Oh, and there's a rocket on the gun in addition to a QR code that the techies in the PCGamesInsider.biz R&D department can't get to work.

This is a recruitment ad, so it's possible this is just a means of drumming up excitement at the company, but Creative Assembly's job advertising with Develop, RIP - which was folded into MCV - has always been very in-line with the games it has been creating.