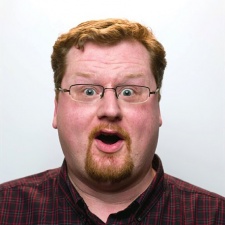 Canadian humorist and Portal 2 writer Jay Pinkerton may have returned to Valve.

Pinkerton departed the Bellevue studio last June, in a year that saw Valve shedding writers left and right. Chet Faliszek and Erik Wolpaw in May and February of that year respectively.

But thanks to user CommodoreKong over on ReserEra, it appears Pinkerton may have returned. The People At Valve page on the company’s site was updated earlier this week to include the writer’s name.

Pinkerton’s entry reads: “Jay Pinkerton is a comedy writer who fell into game writing completely accidentally fifteen years ago and has been waiting for somebody to notice ever since. Prior to joining Valve, Jay ping-ponged around the industry working with very nice people on games that were worked very hard on and then shelved forever.

Pinkerton was one of the writers responsible for Portal 2, alongside Faliszek and Wolpaw, and was behind many of the numerous comics and videos Valve produced for Team Fortress 2.