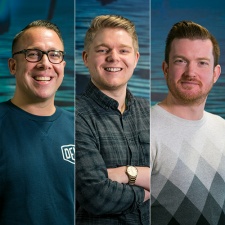 RuneScape firm Jagex has made a number of industry veteran hires as the popular MMO looks to make the leap to mobile.

Clarke comes on board as senior marketing director having previously worked at NaturalMotion as head of global publishing and global head of product marketing and platforms at strategy specialist Plarium.

Prior to NaturalMotion, he worked at EA in the firms mobile publishing arm.

Meanwhile, Zynga alum Steven Tarry has been hired as head of user acquisition. He worked in this area before at NaturalMotion, and more recently, Zynga.

The third appointment is Multiplay veteran Wilson who joins as head of video and live production. Wilson worked at Multiplay for eight years growing the outfit's broadcast and production division. He worked on collaborations with Activision, EA, Microsoft, Ubisoft and - fittingly - Jagex during this time.

“This year is incredibly important for Jagex as we continue with our plans for growth and expansion, both in terms of our live games portfolio and team. Launching our RuneScape MMORPGs onto mobile devices in 2018 is a fundamental part of that growth, so it is essential we have the expertise to make them a success," SVP of publishing John Burns said.

"The appointments of Clarke and Tarry, both experienced mobile industry marketers, helps us achieve that, while Wilson’s experience will catapult our video and live productions to the next level.”

Clarke added: “The longstanding success that Jagex has seen with the RuneScape franchise is unprecedented. To have a devoted following for over 15 years is a testament to Jagex’s live-ops and games-as-a-service approach, and these qualities are fundamental to success on mobile. I am looking forward to being part of this exciting time and helping to deliver the message that RuneScape is a fully-fledged MMORPG that can be played whenever and wherever you want.”

Speaking about his appointment, Tarry said: “I’m thrilled to be joining the Jagex team and honoured to work on such an iconic franchise as RuneScape with the greatest players in the world. I look forward to working with the team in Cambridge to increase our publishing capabilities and accelerate our growth across PC and mobile.”

And finally Wilson commented: “Having spent the last five years working with the amazing team at Jagex on their events & video productions, it was the first and most obvious place to look when considering the next step in my career. Jagex has an unrivalled passion for its unique and innovative games, and is well known for investing in people to help drive the company’s vision of living games forward. I'm truly looking forward to what the next few years has in store."