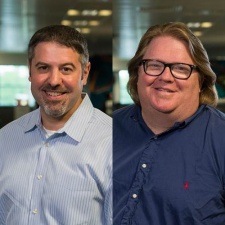 Nick Beliaeff (far right) comes on board as SVP of game development having held roles at both Trion Worlds and Sony Online Entertainment. His portfolio includes work on Rift and Defiance at the former, as well as EverQuest at the latter. Prior to this he was working on transmedia products at toy firm SpinMaster.

Meanwhile, Jagex has a new VP of technology in ZeniMax and NCSoft vet Rob Cordero (right). He has worked in online games publishing for ten-plus years, including stints on The Elder Scrolls Online, City of Heroes and Guild Wars.

“Jagex continues to introduce senior talent to support our growth plans and our vision to become the home of living games," Jagex chief Phil Mansell said.

"Both Nick and Rob were attracted to Jagex by that vision and the scale of our ambition. Nick is recognised as a veteran games development leader and brings expertise in MMO games and PC, console and mobile production. Rob is a passionate technical leader, with a great track record in building and delivering vast online technical infrastructures and platforms in online gaming. Together, their experience reflects a similar scope to Jagex’s ambitions of a broader portfolio of living games.”

Beliaeff added: “Having been involved in online games since 1997, it’s been my privilege to work on some of the industry’s major online gaming brands, from EverQuest to Rift and Defiance. Now I’m super excited to join Jagex and the team working on RuneScape, one of the most iconic online game franchises of the past two decades, and be part of the leadership group steering its future as we expand our offerings beyond PC to mobile, and contribute to our live game publishing offering to partner studios.”

And finally, Cordero commented: “This is a thoroughly exciting time to join the Jagex team and lead its technology strategy as we grow our portfolio of living games, taking the RuneScape franchise multi-format with the addition of mobile and the production of new IP, all of which will be underpinned by robust and progressive technologies.”

Oh, and stay tuned to PCGamesInsider.biz tomorrow at 14:00 BST - some big news from Jagex is a comin'.