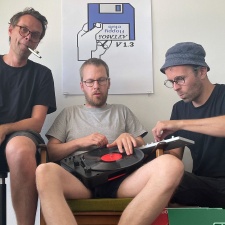 Today, we're speaking to Floppy Club, who submitted Rytmos to The Digital Big Indie Pitch (PC+Console Edition) #16 and walked away as the runner-up.

Floppy Club: Our studio, Floppy Club, is a small games studio in Copenhagen, Denmark. Our current focus is to develop games with a strong focus on sound and music.

When we started the company we had known each other for almost 20 years. Not from making games, but from the music scene in Denmark. Niels has had a record label called Jenka Music for almost 20 years, where he released a lot of music. This is also from where he and Asger know each other, as Asger played in bands that Niels released and managed. Some of you might know the band called Analogik, which also did a lot of music for computer games. Games like Max & the Magic Marker, Kalimba, BattleBlock Theater and most recently Rubber Bandits.

Both of us have also been developing games for many years now in different companies and for different clients. In 2019 we both had a natural break from some of our previous companies, and then it felt like a natural thing to try and combine making games and music in some way. And that is when we decided to make Rytmos.

Tell us about Floppy Club that you pitched at the competition.

Rytmos is a galactic music-based puzzle game. The very simple storyline of the game is that a huge big bang, has scattered all the musical genres, instruments and elements all over the universe, and it is now your job to travel from solar system to solar system and restructure the cosmos in the universe.

The core gameplay is that you have to create small loops in a puzzle maze. These mazes you find on each side of a cubic planet. When creating the loops you have to hit as many so-called “sound emitters” as possible. A “sound emitter” is a small thing making sound each time your cursor hits it, and it could contain a percussion hit, a tone on an instrument or a full musical chord.

When you have managed to solve a puzzle and create a loop, you will start to hear your first musical sequence. Solving more sides on the planets will then add more and more musical sequences to the music and in the end, you will have 6 sequences playing on top of each other and a small piece of music.
After solving a full planet you will be rewarded with different kinds of instruments, so you can jam along with the music from the planets.

Besides making a nice and aesthetically pleasing puzzle game, we also hope to be able to inspire players to listen to new music and get an interest in the different genres within the game. While playing the game you will once in a while receive music recommendations, small historical notes about the genres and explanations about some of the more interesting instruments. So if you want to you can also learn a little about the music while playing the game.

In the end, the game will also come with a website where you can find inspirational playlists and much more.

What do you think are the most unique and interesting aspects of Floppy Club that gamers may never have seen before.

There are many rhythm games out there where you as a player react to prerecorded music, but not so many games where you get to create the music while playing the game. This is probably the most unique thing about the game.

The game is actually a huge music sequencer, that you can tune, play in different tempos, scales and much more, and I don’t think you will find that many games where the music and gameplay is so deeply connected. This also made the development of the game super complex, as the music would change completely when a puzzle was redesigned. Very often that meant that the structure of the music had to be completely re-done.

Rytmos is a relaxing puzzle game based around music. What made you choose this genre, and what do you think you bring to it that may not have been seen before?

We chose this genre as we both (Niels & Asger) have a long history of playing music. It was sort of a natural step to combine our interest in music and games.

In music, you will also find a lot of rules and structures, related to musical scales, steps and so on. We found that this actually could have a lot in common with puzzle games.

How did you come to choose the platforms that you would develop Floppy Club for?

Aside from making the game for PC, it was obvious that the Nintendo Switch console was a good fit for a music-based game. Nintendo has a long history of music games and creative use of sound in general. Games like Electroplankton for instance are a good example of this. Later on, the game will also be released on mobile platforms.

Being an indie game developer is of course hard work. You constantly have to look for investment and spend a lot of the time on pitching and trying to sell the game (and future games) to investors, publishers and the like.

This of course takes away a lot of time that could be spent on developing the game. But after working in the gaming industry as an employee for other companies for many years, it can also be interesting to learn a bit about the business side of the industry. It's probably best if you think like that.

Are there any tips and advice you would give to an independent developer out there who is just starting out?

Remember to think about actually getting the game out in the world. It’s such a shame to see that many nice games and studios go down because they had all their focus on developing the game and forgot to build up the marketing and promotion of the game. Crossing our fingers that this will not happen to us

Being part of the pitching was fun. It was also a little intense and you had to keep focus to make it in time. It felt a little bit like being at an exam again, but that was a good thing. You really had to prepare well and rehearse the presentation.

We got super good feedback on the short time with the judges and it was a really good way to prepare ourselves to make an elevator pitch for investors, conferences and the likes.

We got a badge. As the gamers we are, we are always on the hunt for badges. We also got much clearer in our communication about the game. We hope to get a lot more badges in the future.

Our hope is that the game will sell so well that we can keep our game studio running and make the next game. We also hope that this game will inspire people to go and listen to a lot of new music from all over the world.

We have some ideas for future projects, which will most likely be around music/sound in some way, but nothing concrete to talk about yet.

Rocket Adrift discuss putting empathy, compassion, and community and the forefront of creation