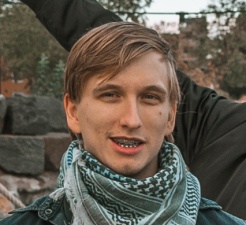 Today, we're speaking to Mana Brigade's Isac Estemyr, who submitted BlackForge VR to The Digital Big Indie Pitch (PC+Console Edition) #10 sponsored by our season sponsors Kwalee, and walked away with the third-place prize.

Isac Estemyr: Well, my name is Isac and I’m the CEO of Mana Brigade and I kind of work with anything I can get my hands on. Mostly Technical Artist and project management as well as some programming and game design.

I started this company with my friend Fredrik. During our studies at Blekinge Institute of Technology, we got offered consulting work from one of the local companies in Karlshamn. Because of this, we founded our company Mana Brigade about halfway through our studies. It was a perfect opportunity to get serious, and at the time we had already started developing the groundwork of what BlackForge VR is today.

The team consists of Fredrik, a programmer with a fascination for optimization. He’s our lead Lead Programmer as well as the second founder of the company. We have Elisabet, our Lead Artist, who does everything from concept art to 3D models. She’s the one that made all the amazing art for the pitch. Then we have Erik, our Lead sound designer. He often doesn’t like public events and would rather just hide within the production instead, but he really works magic for the atmosphere of BlackForge. We also have our newest member Rikard, who’s in charge of the community. It's not the biggest role yet, since we’re still in such an early stage of development. But we wanted to prepare for this role as soon as possible since it’s such a big part of BlackForge as a game.

Tell us about BlackForge VR that you pitched at the competition.

BlackForge VR is a Blacksmithing “simulator”. You’ll create different weapons for adventurers in need with the help of our procedural mesh generation system. We’ve taken a lot of inspiration from 3D modelling software to make the creation of these weapons as liberating to the player as we can. We really try to lean on the creative freedom of the player to avoid getting stuck on a “conveyor belt” style of crafting that you often see in similar games. In BlackForge there are no moulds that you have to comply with, you’re completely free to create your own shapes and details as you go.

Of course, we’re also making a game, not just an artistic tool. So we’ve put a lot of effort into conveying this through the atmosphere and story that you as a player will be able to explore. As I said in the pitch “We don't want to make a perfect experience in terms of creating… We want to make the perfect experience in terms of the adventure, your hero’s journey from a smithing rookie to a master weaponsmith.”. It’s a rough line to balance, being open enough to let the player create anything they want, but being defined enough to give them a purpose. Both through the creative aspect, as well as the storytelling and worldbuilding.

What do you think are the most unique and interesting aspects of BlackForge VR that gamers may never have seen before.

I’d say we explore a few different aspects that might feel new to players of BlackForge. As I mentioned this is not just a game but also not just creative software. It’s a balance between the two, bringing out the best of both experiences. This combined with the immersive capabilities of VR technology allows us to take this to the next level.

I'd say that another unique aspect of BlackForge is the creative aspect of the crafting itself. I’ve seen a few mechanics in similar games that also lean into the creative aspect of crafting weapons. But they have to limit themselves to comply with the game as a whole, which has a different focus for the game experience. We intend to build the whole experience around this type of crafting concept, which opens up new ways to interact and build around the game as an experience.

BlackForge VR is a game all about creativity and precision. What made you choose to create this type of game, especially one based in VR, and what do you think you bring to it that may not have been seen before?

We’ve actually iterated on the design of BlackForge for quite a while now. Some of the concepts even hold up on their own even without the crafting. When we first created the prototype of what you see today, we felt like something clicked. We’ve seen what this kind of technique can be used for in flatscreen games. But when we brought it into VR for the first time, you could really feel something different. There was something there that hadn’t been explored before. The physical nature of VR made it apparent to us that this couldn’t be done without it. There is no feeling like this on console or Flatscreen games that we have experienced.

How did you come to choose the platforms that you would develop BlackForge VR for?

As mentioned, the experience we’re building wouldn’t be the same without VR. With the physicality of the player’s actions and the medium's unprecedented immersion, we had no choice. This was meant to be built for VR. As for the types of VR platforms. Right now we're building it for SteamVR. But we are also looking at different audiences and opportunities, for example, Mobile VR (like the Oculus Quest or other similar wireless headsets) as well as Playstation VR. It would be a shame to disregard these options. We’re planning on releasing it to Steam, then porting it to the different platforms from there. We’ve already planned and prepared some groundwork for this.

I really think this is a question of tenacity and determination. If you have the determination to get your idéas through, and really work for it, opportunities will show themselves. Since we started our company, we’ve worked harder and harder to show what we’re capable of. Even if we have no published titles to flash around, the word seems to have gotten around. We’re currently in the process of about five different consulting projects that could help us self-fund the work for BlackForge. We're also looking into the possibility of publishing and other forms of monetization to be able to work on BlackForge full-time.

So, it’s not easy by any means, but I’d say that if you’re determined enough, it’s also not as hard as you might think.

My advice would be to just go for it. If you really want to make it, you have to put in the effort. It’s not always the most fun answer, but from my experience, it’s the truth. It doesn’t mean burn yourself out, seriously don’t, but compromise what time and resources you have available. We started out when we could still rely on the studies to keep us afloat. After that, I took a part-time job and focused the remaining hours on the company. Also, don't be afraid to reach out to fellow game devs. Most of us are more than happy to help out.

The pitching was really interesting, this was the first time I’ve encountered this type of pitching structure. It really kept you on your toes and you were able to get a lot of different types of feedback in such a short amount of time. The mood of the whole thing was way more relaxed than I expected, especially when talking to the other pitchers, it was really fun and I’ve learned a lot.

I’ve got some insight into what hooked the judges from my pitch, what was still unclear after the pitching as well as what sort of details mattered for different people. It was some really diverse and covering feedback so I’m happy to continue improving the pitch from this. What I would hope to gain is even more detailed or knit picky details, I’m the kind of person that loves that kind of feedback.

The future of BlackForge is of course to have it released, as mentioned before, we also have some post-release plans for porting to different platforms in mind. But we’ve also discussed what kind of improvements and additions we would like to add to keep the experience fresh over a longer period of time.

As for future projects, we have some prototypes from BlackForge’s early prototypes that are also promising. These are, for example, exploring different kinds of core mechanics that we would like to innovate on in the same way that BlackForge came to be. We’re super excited to continue on those projects as well.