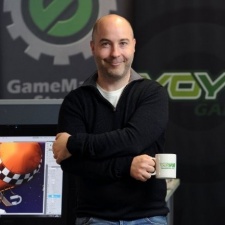 GameMaker is celebrating its 20th birthday on November 15th.

That's a long time for any company, with its tech being used in hugely creative and success indie hits like Hotline MIami, Hyper Light Drifter and Minit.

We caught up with YoYo Games general manager Stuart Poole to see how the company has stayed relevant and what the future looks like for the development tool.

Happy birthday! How has GameMaker grown and developed over the years?

We have consistently improved GameMaker by lifting limitations while still keeping its core usability intact. In an increasingly diverse and capable landscape of platforms and business models this has been a core principle that we have used to guide our changes to the product.

Initially, we looked to diversify the target platforms that GameMaker could be used for, keeping the ease of development but providing more avenues for our users to exploit. Over the years, we have continually raised the bar in the kind and quality of the games that our users could make, removing limitations and generally providing better features and access to the target platforms.

As the industry grows and expands how does GameMaker stay relevant with the needs of developers?

GameMaker exists to facilitate game development for people who want to learn how to make games using a tool that’s at the heart of many amazing indie games.

While we position ourselves as an easy-to-learn and easy-to-use game engine, we also strive to help commercial game developers to make better games more easily.

Our focus is on simplifying the tools to make visually stunning 2D games more achievable. Over 1,000 developers sign-up for GameMaker every day. Most of them are beginners who want to make their first game or learn how to code.

How does your development software stand out in 2019?

For game developers, GameMaker is the fastest way to create games and prototype ideas, and it remains the easiest way to create a 2D game for multiple platforms as it enables cross-platform development from a single code base.

What are the future plans for GameMaker?

We will launch Sequences in spring 2020 and go into open beta by the end of the year, which will help developers and artists to easily create complex cutscenes along with simple GUI-based manipulation of animations and audio, all of which can be positioned or context-triggered to occur discretely anywhere within the game.

Was GameMaker designed with professionals or beginners in mind?

It was designed by Professor Overmars as a study tool for students, and it’s always been vitally important to us that GameMaker is easy to use and learn.

This simplicity and fast workflow makes it appealing to professionals as well, and our pro-community has really helped us to continually push the skill ceiling of the product.

Many games have been created with the development tool, which ones would you say are the most successful?

Undertale and Minit stand out from a sales and awards perspective. Everyone still refers to Hyperlight Drifter as a classic GameMaker game, but from the perspective of making great use of the GMS2 toolset, Levelhead and Overcrowd are pretty spectacular.

When it comes to development, what makes GameMaker a go-to tool for game developers?

Time is money. Developers consistently tell us that they can make and ship their games much quicker with GameMaker because it’s designed specifically to make 2D games quickly and easily, and shipping across platforms from desktop to mobile to HTML5 to console is achieved from a single code base.