Why Tencent's Next Studios is combining PvP and PvE with Synced: Off Planet 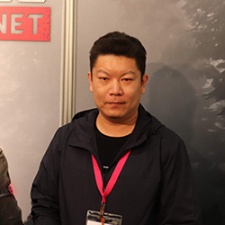 A few years ago, battle royale was the hot new thing with games like Playerunknown's Battlegrounds borrowing elements from the survival genre and combining it with the realistic gunplay of military sims like ARMA.

But there's also an entry from Tencent's Next Studios Shanghai developer- with the help of Brighton-based Studio Gobo - called Synced: Off Planet.

"We thought about a lot of very competitive games. We think that currently in the market we don't really have massive PvP and survival aspects at the same time," producer and director Clark Jiayang Yang tells PCGamesInsider.biz.

"With this game, we have 48 players in a round with 1,500 AI characters. This is something we've never seen before. There are two parts in the title and in the game; 'Synced' and 'Off Planet'. The whole world has gone to shit and there's a lot of zombies. The only chance to survive or escape is to capture a shuttle that will launch into orbit. In that sense, players only need to capture the ship; once they've done that, they've won. In that sense, users don't need to kill everyone. They only need to capture the shuttle. We think we have created a new journey about how the player survives and escapes this situation. The second part is 'Synced', which we think is the most unique gameplay we have here. Everyone in this world has a chip in their neck which is part of the reason they're zombies. In this game, there's another way of taking down zombies - sneaking up on them, killing them and they'll drop a core. Users can sync with that and control hordes of zombies. They can fight for the player and attack other users. This gameplay changes the way we deal with zombies. They're not just a threat; they're an opportunity, too."

Asked why these kinds of projects that mix PvP and PvE gameplay have come around now, Yang - perhaps unsurprisingly - says it's a simple case of technology becoming more advanced.

"From a technology standpoint, this is something we couldn't do before. Now with more powerful CPUs and GPUs we can. For the zombie hordes in our game, we use all the juice from both bits of hardware so this can be possible," he explains.

"You also don't even see this technology in other games because it's really hardcore stuff. I'm not sure what the programmer did but they made it work. At the same time, from a gameplay and industry standpoint, we already know what PvE and PvP games look like. But as a developer, we want to push forward and see what happens if we put those two things together. From a player point of view, they're dealing with several threats. This feeling gets the player more hooked in the game, which is an advantage. I hope the industry moves towards this and PvPvE is booming and that there are new games coming out in the future that really leverage this."

You might be curious what Next and Studio Gobo are doing respectively. The former is handling the main loop of the game, with the UK developer working on the Haven hub areas where users can buy items, organise their team and so on.

"That's an area that the user owns and attracts survivors from the world which offer different things to the player," Yang says.

"The Shanghai studio is working on the core gameplay, but Gobo is handling the haven side of things. It's important to leverage international talents. There are challenges to be dealt with every day. What is interesting is we'll develop something and Gobo can test it and vice versa. This collaboration is driving the quality of the game. Gobo is also very experienced. The studio has worked with Ubisoft's For Honor, Disney Infinity - they're great at this kind of thing. For us, it's leveraging this talent in Brighton and them contributing to a bigger game."

While Next is owned by Chinese tech and entertainment behemoth Tencent, Yang says that this doesn't automatically mean that Synced is going to be a smash hit. The director and producer says that while it has the backing of the giant, it is a rather small team that has to prove its worth.

"Next is a smaller studio within the Tencent family," he explains.

"Yes, we have a lot of different developers but the team behind this team in Shanghai is only 50 people. There are ten people at Gobo working on this. The point is that Tencent is huge but for us, we don't have all the resources. That's another aspect of Tencent's culture - they give us the platform and opportunity but we need to make a name for ourselves. That's what we're trying to do. That drives us to a new place."