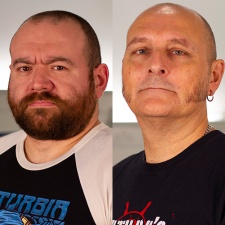 Back in 1997, before its purchase by EA, Bullfrog Productions made a goofy but hugely popular sim title called Theme Hospital. Now, over 20 years later a team of developers - including creators who worked on that original title - are releasing a spiritual success called Two Point Hospital.

We caught up with Two Point Studios art director Mark Smart and lead animator Chris Knott to find out more.

So can you tell me a bit about how Two Point Studios came about?

Mark Smart, art director, Two Point Studios (above, right): This is 20 years in the making. I worked with Chris about 20 years ago. He was the animator on a game called Startopia and I was the artist on it at Mucky Foot. We followed each other around. We were both Guildford based and there's a games community there. Heading up that studio was a guy called Gary Carr who worked on the original Theme Hospital. When Mucky Foot sadly folded we all decamped and went to Lionhead. We met Mark Webley there. Both Gary and Mark had worked on Theme Hospital. We were both there for a number of years. But all good things come to an end and Lionhead ceased to exist. We were all together and loved these kinds of sim management games. Gary and Mark had decided to start this studio and got in touch with us two asking if we wanted to make the kinds of games we used to love making. So Two Point Studios was born. The initial thing was asking ourselves what kind of game we were trying to make - we knew we were going to make something sim-based. We felt it was the right time to make a spiritual successor to Theme Hospital. It just felt that there was a demand for it. We were all connected to it. We thought we should be the ones to make it.

What was the initial lift pitch behind Two Point Hospital?

Smart: The number of people who kept saying: 'Why hasn't there been another Theme Hospital game?'. It's a title that's so fondly remembered. Everyone who speaks about Theme Hospital is like they're recounting an old pet or family friend. In 20 years, no-one has really done a hospital game.

Chris Knott, lead animator (above, far right): Those games are coming back as well. Frontier is doing really well, and games like Prison Architect. We wanted to make a game that from that time, but had that same that you buy that game, it's complete, you don't buy half a game. We wanted to make a complete, immersive experience. It's possibly considered a bit old fashioned to make a game like that. We felt very strongly that the game should 'traditional' value.

The excitement when Sega started teasing a new project in the vein of Theme Hospital back in January was quite something. How was that for you?

Knott: We didn't know how that was going to go down.

Smart: When things are so fondly remembered you have to be careful as there's that double-edged sword where people don't want you to touch it too much.

Knott: The pressure is to not mess it up. When something is that well-loved, if you get it wrong you're going to have a backlash.

Smart: We're the same - there are things that we love playing from years gone and when they've been remade, if they're not done properly it's annoying.

Knott: We were asking ourselves last night after the show why they remake films. We weren't seeking to do a remake. We were looking to do something that's brand new, fresh, in-depth. It has that spiritual tie to it. We are making something new.

Smart: And it's 20 years after, so the fidelity is greatly improved. The density of the game is much higher. We have something for a casual player where you can one-star hospitals so they can go through the game. The difficulty will ramp up the later in the later in the game you get. If you want to just enjoy the game, you can one-star the levels. If you want to do two or three stars, you have to then go down to a granular level. The hardcore gamers will be happy, as will the casual gamers.

Knott: We have to appeal to a wide audience. There are young people who have never played Theme Hospital and have no idea what it is. You have to make this as appealing as possible.

Can you tell me a bit about the process of updating the game? As you have said, it's a balancing act of tweaking an established formula while also not changing it too much - something of a razor's edge.

Smart: When a lot of people start playing it, they say there's a familiar feeling. They know how the game works because it's like how strategy simulation games used to be. We wanted to have that there so that people know instinctively what they're doing and where they are going. But the density is there that if you put down a plant or bin in the world, they don't have just the functionality of having an object in a room. Everything has a knock-on effect on the staff and patients. It's not just having a hospital and filling it with stuff randomly.

Knott: With the processing power as well, we can layer on this stuff. Each member of staff has actual traits. For example, they can have green fingers which means they'll perform better if you put plants down. We're just layering on this extra depth to all the characters in the game.

What lessons have you taken away from other spiritual successor titles, such as Mighty No.9?

Knott: No in-app purchases. We wanted to make a complete game. We didn't want to go down that route of having a business model and just following that. We just wanted to make a game. To a certain degree, we have shut ourselves away a little bit and gone back to making games the way people used to. We don't want to look at what other people have done and try to trust our own judgement. We've all done this. Sometimes you ask yourself if you're doing the right thing. But it's a case of trusting your own judgement as a studio.

Smart: There's also a resurgence in games that are fighting back against the in-app purchase model where consumers only end up buying half the game. One great example is CD Projekt with The Witcher 3 which was amazing. It's simple - you've paid us the money, here is the full game.

Knott: It's perhaps a bit old-fashioned. But it doesn't mean it's wrong.

Smart: But people are starting to appreciate that again. You buy a game, so you get a game and now you can experience it. It's yours to enjoy.

Theme Hospital was very popular back in the day, but the PC market has changed dramatically in the time since. Back then, consumers would go to a physical store and buy a disc - it was very accessible. Now with distribution being primarily digital, hardcore gamers will have Steam accounts and the means to buy the game but a more casual audience might not. How do you think that will affect Two Point Hospital's performance?

Smart: We're not sure, is the answer. We're just waiting to see what happens when it comes out and then react accordingly to the reception we get.

Knott: With games we've made in the past, we wouldn't be talking about something that's coming out next week and we're still balancing the project. There are a few days [at the time of the interview] to tweak. You don't have to ship discs, you don't have to buy shelf space and so on. You could say there are good and bad things about both systems.