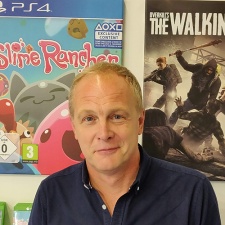 Since the TV show debuted in 2011, The Walking Dead has become one of the biggest names in the media space.

Based on the comics by Robert Kirkman that kicked off in 2003, the IP has come to television as well as video games in a number of different forms. In 2010, Kirkman and TV show executive producer David Alpert established Skybound Entertainment to manage the IP as well as making the most of it.

Though the company has done video games with its IP in the past - to varying degrees of success - at the start of 2018, Skybound set up a dedicated games division.

This arm of the media giant has a few different objectives. These include licensing out Skybound IP to developers for games, publishing indie titles and handling physical distribution for projects. The firm is already doing this last piece of the puzzle, releasing boxed version of Slime Rancher and The Long Dark, games that have already been released digitally to sizeable success.

"There's a whole bunch of other publishing services that Skybound has as a group that we think as this story starts to unfold will become really useful," EMEA general manager Mark Stanger tells PCGamesInsider.biz.

"The work that we have done with The Walking Dead over the years means that we have some great relationships in the film space and TV space, particularly with Amazon. We're a comic book company by heritage. We have a relatively new relationship with Simon & Schuster for traditional book publishing which might be relevant to some developers that we work with going forward if they want to explore that route. But then the team also has a group that looks after live events or merchandise. Apart from just the physical box publishing activities, there is other stuff we can add on the publishing side of things. It's been a matter of getting all those elements lined up with what we're doing in games."

Asked to explain the company's strategy when it comes to games, Stanger explains that it will have greater control over how Skybound IP is used in this space.

"We have the option now to leverage our own IP in the games market," he says.

"Whether that's Outcast or The Walking Dead from our stable of IP, we have the option to take that to market ourselves if there's a game proposition. We'll still continue to work with third parties. We do have the Interactive team, the people who have historically worked with Telltale and those sorts of companies. Where it's right to license one of our IP out to a third party, we'll still do that if that's the right approach to take. But now we don't have to go down that road. If we want to self-publish, we can. There's a strategy that is obviously based around our own IP, but there's a strategy that's about going out into the development community and finding really compelling, strong and interesting games where there's a reason why we're taking it to market."

He continues: "You can think of the new Skybound Games publishing division as an extension of the Interactive team that the company has had for five years. Those are the people who really started doing the really focused work in the games space with Telltale, 505 and Scopely in the mobile space. That was very much on the outbound licensing arrangement. That team is very much still there and those opportunities will be reviewed and in some cases it'll be right to go down that route. But now we've got this other option to self-publish. It's going to be almost looking at each opportunity on a case-by-case basis. Is it right to go with a third-party on some kind of a licensing basis or will it be right for us to do this as a self-published property. It's great to have the ability to go on either route."

The firm is also looking to fund development, and has money set aside to be able to do that. Skybound isn't "necessarily" looking to own the IP, but that, of course, depends on the deal that's struck. Right now, the media giant isn't looking to spend big on developers - you're not going to see a $10m-to-$15m Hellblade-tier project appearing on its roster - but right now the only criteria is a good game or an interesting studio.

"[We're looking for] something that's got a real hook and reason for being that we can then amplify," Stanger says.

"A game doesn't need to have a community of scale but it's got a passionate active community - something like The Long Dark or Slime Rancher. We thought there was work we could do to amplify that noise and story. We know for a fact that other developers on other games out there that have those same hooks that we can get hold of. Genre-wise, we're completely open. With Slime Rancher and The Long Dark they are poles apart. They are genuinely great games with a really active community that are talking about them for quite some time. From a quality perspective, there needs to be some real hooks that we can get into and amplify and hopefully have some great results with."

He continues: "The only parameter we have is great game, interesting studio that has a story to tell. We'll try and work everything else out if we can. There's going to be some that we win and some that we lose. We have no hard and fast parameters in terms of differentiating like that."

It would be great to get to a point where we have a really nicely blended portfolio of titles based on our own IP, some titles where we have invested early and worked with the developer to bring the title through

Speaking to GamesIndustry.biz earlier this, Stanger said that Skybound was looking to publish eight-to-10 games each year. Over time this will be a blend of new IP, licensed titles and distribution deals.

"It would be great to get to a point where we have a really nicely blended portfolio of titles based on our own IP, some titles where we have invested early and worked with the developer to bring the title through," the GM explains.

"And then some more opportunistic lower-hanging one where they may have already been out digitally but haven't been presented physically. We can do something cool with the boxed version of those games. A portfolio that blends across those three - whether that's 33 per cent for each year I don't know. Having eight-to-10 games per year will enable us to get the right sort of focus for each one. Within that, we can see one or two that would be based around some Skybound IP. I could see three, maybe four, where we have a more traditional publisher role and made an investment in the title. Another two or three where they have been released digitally but we have secured the physical rights. We're also really passionate about trying in every instance to do something really cool with the boxed proposition."

Being part of a media giant like Skybound naturally has its advantages. Stanger says that it has a "genuinely holistic" offering that includes not only games, but TV, film, graphic novels, books and much more in the future.

"It's going to be really beneficial for Skybound Games in the long term to be able to offer a creative partner a genuinely holistic proposition in terms of how we go to market," he says.

"There these other elements that Skybound does and does really well - film, TV, books, comics, live events, merchandise and so on. They've got a really smart digital content creation division within Skybound Games that can create anything from a 30-minute documentary on a game to a 30-second trailer. A couple of folks over there are ex-Machinima so they're able to offer those kinds of services. We've got a team that's heavily involved in the influencer space and has been for some time. Those are the kinds of things that whilst we're aware there are a number of other indie-focused publishers in the market right now, there aren't that any that can offer that range of services to a creative studio. If we can start to bring some of that to bear, that becomes really powerful."

So far we've been talking about Skybound Games' first year. But what does the second hold?

"We have already announced some titles coming out in 2019 so we're really exciting about Death's Gambit, Hollow Knight and Skull Girls. They'll really start to raise the bar up for us. Obviously, in terms of the resource and manpower now needed to support that from a publishing perspective, we're looking to make sure we have the right people on our side to support all of that. The publishing team will grow a little bit both in the US and in Europe. We want to keep it quite light and nimble so that we can be quite fleet of foot and pick up the right opportunities and respond and deliver quickly. But we'll clearly need to ramp up a little bit from where we are today. We're stretched quite thinly at the moment."