After years of hard work, NetEase says it's seeing success outside of China 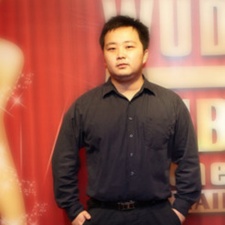 NetEase is one of China's biggest games companies and one that no doubt has a queue of Western firms at their door looking to partner up. The firm has an on-going partnership with Blizzard, operating the likes of Overwatch and Hearthstone in the region. At the end of last year, the company was tasked with launching a little-known game called Minecraft into the region.

Speaking to Simon Zhu, GM of the firm's Strategic Investment and Partnership division of NetEase's games arm, it sounds like things have gone off to a good start.

"We launched Minecraft in China which has been a huge success," he says.

Helping other companies launch isn't NetEase's primary business - launching its own games are. Previously the firm has been best known for MMO titles such as Fantasy Westward Journey and New Ghost, but recently the company has tried to make its offering more diverse.

"We started out in multiple new genres which we haven't been doing," Zhu says. "We have been creating games like a MOBA. Our Onmyoji Arena is super high quality and is doing really well in some regions. Asymmetric PvP game IdentityV is also doing great - not just in China but the rest of Asia. Our battle royale games have had great initial results in China and right now is a national phenomenon in Japan.

"We started in new genres. After a few years of hard work we are starting to achieve some good results outside of China, especially in Japan."

Asked if he was surprised by this success, Zhu says that it was anticipated - but welcome.

"We knew it was going to work well in Japan and we have been trying multiple initiatives, but the level of popularity Knives Out has seen still excites us," he says.

"As a reward to the player community, we are going to launch a real Tokyo map in Knives Out. This is one of the biggest topics for the player community in Japan. We are super excited about the launch. You are seeing all those famous places in real life in the game. The thing about that for me was when I was a kid and played those games, I wished my campus would be in the game. That's the same thing."

Knives Out is just one battle royale title that NetEase has released. The firm also put out Rules of Survival. Launching more than one title in a specific sector is an interesting tactic, but Zhu says that the Chinese company isn't thinking about this genre specifically. Rather, the firm is approaching these projects as simply a number of multiplayer titles.

"We don't think purely from a battle royale perspective," he explains.

"In the past, we have been super good at MMOs. That created a world, so people made friends in a virtual world. Multiplayer is very different. In order to have the best experience, you need to bring your friends in real life together. It's easy to be viral. Young people love multiplayer games more than before. Having said all this, we are looking at the new wave of multiplayer games which is meaningful and significant. We are quite interesting exploring that."

Given NetEase's heritage in the MMO space, it's no surprise then to see the company become CCP's official partner in China, taking over from Tiancity - who in turn were handed the reigns from launch partners Optic Communication.

This partnership came about due to one of NetEase's designers being a massive fan of the game.

"The whole conversation started two or three years ago. We have huge respect for Eve Online and CCP. Heimar is our best friend and has always been very great to us," Zhu says.

"We have always tried to find ways to work on something together. In that process, one of our designers is a massive fan of Eve Online - he's played the game or more than ten years and knows every single thing about it. He has the true passion to bring the true Eve Online experience to mobile. Fortunately, NetEase has all the engineering capability to build that universe again on mobile with high-quality graphics and system. So, we brought that designer to bring Hilmar [Veigar Pétursson, CCP CEO] and his team and the conversation went very well. It was a very easy decision for both parties. Even for us, we understand that the producer and designer has a huge passion and true understanding of the game. That's how it happened. We've been working secretly for a while and we are happy to be able to announce the game this year. Actually, the quality is so great. We are happy to also have the press release right before ChinaJoy to announce the full publishing deal - not only the mobile collaboration but also that we are operating Eve Online in China. We believe its a great game. It's evergreen. We want to make everything right and to make the player feel excited about this beautiful universe."

China's games market leader Tencent - while still being behind roughly one-third of global games revenue, has noticed more of a shift over to mobile from PC in terms of revenue and users. This is also something that NetEase has seen.

"The overall market growth is driven by mobile. It's a more accessible device and they're only getting more powerful. Mobile clearly is a big priority for us," Zhu explains.

"But, at the same time, we are seeing in consumer trends that hardcore gamers want more creative, high-quality games on PC or console in China. We still keep investing in PC games as well. From our perspective, the PC games market is very big. We launched a PC title in June named Mysterious Sword. That game is a social phenomenon. Everyone is playing it. Every day that's attracting more than one million players and multiple thousand people are waiting to log in. From our point of view as a games company, if we are creating something really high-quality, really innovative and a world that players want to explore, that's okay. If you look at our other PC games, they're still doing great. My comment on this is as long we keep innovating, we are producing great products, business is not an issue."