"We're able to respond to fickle demands of the games industry much faster than traditional, big studios" 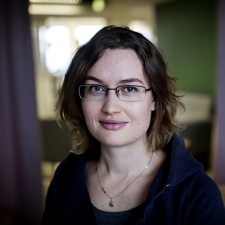 Midnight Hub is a veritable super group of Swedish games talent, formed in 2015 by vets of Mojang, Paradox and Tarsier.

"I suggested we should start our own thing. Johan and I had been friends ever since we both studies game development at Uni together, almost 10 years ago," CEO and producer Sara Casén says.

"I introduced Johan to my friend Erik, who at the time was quitting his job at Paradox. We started out with a short, intense 48 hour game jam based on a random theme we picked out of a Cards Against Humanity-box. After this weekend we said: 'Alright, let's go for it and really found our own studio'. We formed the studio around the people in it, not on one single idea."

As is no doubt a surprise, Casén says that as an indie developer, Midnight Hub can be much more agile than the triple-A firms its staff were previously working at.

"We're able to respond to fickle demands of the games industry much faster than traditional, big studios. We can all sit around the same table and talk with each other, taking all decisions as a team."

The outfit's first project is Lake Ridden - originally a horror title named Key Master - something that came out of an internal pitching process - one that took into consideration the business side of things as well as the creative one.

"Everyone in the team got a week to prepare a pitch that had to be a sound business case but also something that took advantage of our core strengths as developers, and accounted for our weaknesses. After getting a lot of valuable feedback at GDC 2017 we changed the game from a horror game to full-on puzzle. The original idea did contained a lot of puzzles and story, but also som psychological horror. The final game, Lake Ridden, is absolutely not a horror game, but at times it has an eerie feeling to it."

To get this project made, some of its founding members went without salary prior to securing investment to keep the costs down.

"It's a small indie studio, and many of us founders worked without any salary at the beginning before we were able to secure an investment," Casén explains.

"It's really tough having even such as small crew as we have (five), and we feel extremely lucky to be able to follow our dream of founding a studio together."

The game rolled out onto Steam on May 10th, and - going on what Casén says - things seem to have gone pretty well so far.

"We trended on Steam's front page for five days, more than 60 players reviewed the game with a 96 per cent positive rating and big streamers like Lirik and Forsen streamed the game," she explains.

"I think we managed to do something really amazing with such a small team and the limited resources we've had during development."

That being said, there are some things Midnight Hub would do differently next time; namely getting a storepage up earlier.

"Getting your Steam page up as soon as possible so people can start wishlisting your game as early as possible is very important," she concludes.