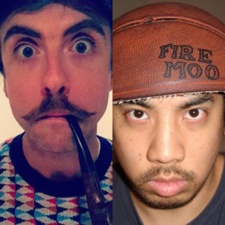 The CVs of the studio behind Kickstarter indie game Knights and Bikes should come as no surprise to anyone who has seen the title in action.

Between them, Foam Sword's Rex Crowle (right) and Moo Yu (far right) have worked at Lionhead, Insomniac and Mind Candy, and LittleBigPlanet maker Media Molecule where the duo met.

Foam Sword is something of an anomaly in the current market. It's typical for developers to leave triple-A to pursue creative, indie projects, but those game makers already worked at studios famed for their creativity.

"Indie, for me, is a good opportunity to test my abilities," Yu explains.

"It's really easy when you're in a big studio to not really see any of your weaknesses. You rely on the expertise of all the people around and stay in your little bubble. Being indie, you are forced to do as much as you can. I'm doing programming, Rex is doing art, but there's a lot of things that go into a game that aren't those. We have to fill in all the business and development, accounting, fundraising, community, game design and story and that sort of stuff. For me, it was about getting into those parts of games development that I haven't been spending a tonne of time in."

This isn't the first time that the duo has gone indie together before in the past but that venture didn't quite work out - this time, Yu says, the team has learnt from its mistakes.

"It was a bit early for me and there was too much to learn really quickly," he says.

"I'm really enjoying the second time around where I made a lot of mistakes the first time. I can put those to the side and make a bunch of new mistakes. Hopefully, it's not so many mistakes that this one goes under like the other one did."

The studio's first game is Knights and Bikes, a cute and very British title that can best be described as Goonies: The Game, but set in 1980s Cornwall.

"That was the very bold start, really. The lineage has continued. It's still a big influence on the game. We wanted to get that feeling of different kinds of childhood friends all grouping together to find some legendary treasure and learn about themselves and the adult world along the way, and how they fit into that," Crowle explains.

"We still have that, but we definitely moved away from the 'Let's rip off The Goonies' starting point so that it's set in Cornwall and it starts two young girls. They're new friends called Nessa and Demelza. We had a larger group of characters but we whittled it down into these two girls because we felt they were the strongest characters and it was really interesting for us to make a game that was about two girls and now just go down the usual boy route."

He continues: "You can stretch yourself and want to get out of your comfort zone and it's been good to try and not just make a game about ourselves."

The retro 1980s drama has been somewhat popular recently. Going back a few years you have the film Super 8, and of course Stranger Things. But Crowle says this is a very different, and indeed, very British take on that time frame.

"It's interesting because Stranger Things didn't exist when we started this project," he says.

"We were focusing on kids on their bikes riding around in the 80s, and suddenly this show pops up out of nowhere which had quite similar influences. It's been really beneficial to us to see something else that's similar getting loads of attention. We're sticking to our guns and we're trying to not get too influenced by it and we're deliberately making sure that this is our version of the 80s. We're not going super neon and trying not to have every kid in Ghostbusters outfits.

"It's a very English take on the '80s. I grew up in Cornwall in the 80s and you didn't actually see a lot of that stuff because it takes a long time for that pop culture to permeate through the world. It wasn't until the 90s that it was getting 80s in Cornwall. We have our own English take on it."

To get this game made, Foam Sword turned to crowdfunding platform Kickstarter, raising £126,447 from 4,796 backers. The reason the team used this means was to get a great deal of feedback on the game during its development.

"The main thing about Kickstarter is having that sense of community," Yu says.

"I'm always very sensitive with feedback and things like that and when I've had other projects, you announce them on Twitter and get a lot of positive feedback, a lot of negative feedback, but you have no idea where it's really coming from. You don't know that the negativity is coming from people who will love your game but you're doing it wrong, or people that would hate you no matter what you're doing or that kind of stuff.

"Kickstarter was a really nice way to reach over to the community where no-one is going to be there if they're not interested in what your ambition is. You can use them as a guiding light as you create the project you want to create. It's really nice to have that community built up. We're a really small team so it helps us a little bit to get out of our tunnel vision sometimes, but also when it's hard to keep going as a tiny indie team, and just knowing that there's at least 5,000 people that care about our game. That's definitely something that keeps you going and keeps your motivation up."

The project - and the Kickstarter - also attracted the attention of Tim Schafer's Double Fine who is now publishing the title.

"I realised how great they were when we did Rezzed last year. We had done a few small events before then, we got handfuls of press, but they have done this many times, they know how to do it and at Rezzed we had back-to-back interviews for the entire three or four days or however long it was. They have been fantastic and good friends of ours for a long time. Rex has been very close with Greg for a while. I've known Tim since my days back in California. Their community manager James Spafford was our community manager on LittleBigPlanet. We have been very close to them, they have a lot of Kickstarter experience as well so we reached out to them before the campaign to get some feedback. We've always had a really close relationship anyway and it just became a really natural fit for us and our game.

"If you look at the kinds of games that Double Fine makes, Knights and Bikes fits perfectly into the kind of audience that they've created over the years. It's been a great relationship."

The game was set for launch in 2017, with that now bumping to 2018. Yu says that the hope is always to have the game out in a given year, but more importantly, Foam Sword wants to deliver on the expectations for the project.

"We start every year hoping this is the year it comes out. That's true this year as it was last year," he laughs.

"Our ambition for the game is really to deliver on the promise that we made to the Kickstarter community and fulfil this project that we started on. As Rex said, we started with this idea of a Goonies-inspired 80s thing but I think there's a lot more nuance as to what each of us wants to get out of it. For me, one of the big things is having local co-op story-driven games. I used to love the handful I played when I was a kid and I feel there's not a lot of them now. We don't think of our ambitions in terms of wanting to sell so many units, getting a certain review score or whatever. From the start of the project, it's been about adding more and more things we want to achieve. That's how I think about it."

Crowle concludes: "Every game I have ever worked on, the most important thing is getting the letters afterwards. I've had some incredible ones from players that play Tearaway about things it helped them within their lives and how it made a difference to them. We want to make sure that this game has some similar, heartwarming letters at the end."