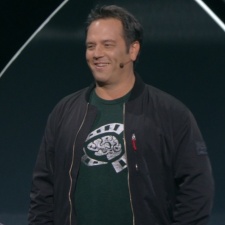 Once again, Microsoft is preparing for the next generation in video games.

No, we're not talking about consoles and hardware - though that is, of course, a factor. But the Xbox firm is positioning itself to cater for a broader audience than ever before, and that, of course, includes PC.

This year was light in big triple-A moments, with Xbox choosing to showcase a broad variety of content. That's not to say that the big boys weren't on-stage - the show more or less kicked off with Respawn and EA's Jedi: Fallen Order, while we also saw a trailer for last year's megaton reveal, Cyberpunk 2077, featuring none other than John Wick and Matrix Star Keanu Reeves. The man himself appeared on-stage to unveil the game's April 2020 release date, being charming and oh-so-beautiful as he did so.

Oh, and we saw our first official glimpse at Game of Thrones author George RR Martin's collaboration with Dark Souls creator From Software in Elden Ring, a rather depressing but intriguing affair. That title had leaked earlier in the year, but made for a big moment regardless.

The same was true for Ninja Theory's Bleeding Edge, a chaotic multiplayer title that more or less opened the show. Sadly this was the only new title from one of the Big M's new acquisitions to grace its stage. We did see trailers for The Outer Worlds and Wasteland 3 - from Obsidian and InXile respectively, though.

There was another new member added into the Xbox Game Studios family, however, with Tim Schafer's Double Fine Productions being acquired by the Big M. Though in the past, Microsoft has said that these purchases aren't like filling in a bingo card, each one has filled a certain niche in its line-up, with Double Fine adding not only adventure game expertise but also a degree of indie publishing know-how, which could be handy in the coming years.

Speaking of indies, these smaller, creative projects were a common sight during the showcase, even outside of the tight showcase for Microsoft's [email protected] programme. These included Annapurna's intriguing top-down title 12 Minutes, Spiritfarer and deer puzzler Way to the Woods.

Regarding that [email protected] sizzle reel - head of partnerships Sarah Bond said that all titles show were going to be coming to the company's Xbox Game Pass subscription service day-and-date with their regular releases, adding to that programme's draw.

As announced before, Game Pass is coming to PC, with more than 100 titles set to be in the all-you-can-eat pot by August. There's an open beta kicking off now, too. And for consumers who use both console and PC, there's the leaked Xbox Ultimate Game Pass, which grants access to the console and PC versions of Game Pass, in addition to Xbox Live Gold for one few - not bad at all.

It wasn't just games big and small on Microsoft's stage, either. The firm once again put a focus on titles from the East, including Sega's Phantasy Star Online 2 making its American debut on Xbox - European details to follow - as well as SmileGate's cult shooter CrossFire X and Bandai Namco's Dragon Ball RPG, Kakarot.

There was plenty for long-time PC fans, too, with a new Microsoft Flight Simulator and a touched up version of classic strategy title, Age of Empires 2.

All of this, of course, was on top of two rather bizarre collaborations - Forza Horizon 4 and The LEGO Movie, and Gears 5 and the Terminator. All of which makes more sense than that Gears of War Funk Pop partnership, which I still don't really understand.

The firm is also showing off its XCloud streaming service on the show floor, ahead of a public beta later this year. Microsoft also revealed details about its brand new console - Project Scarlett - which focused on the technical side of things. The firm is clearly going all-out to dominate this next generation, providing something that is good for playing games and little else. Tech specs aside, we know that there's a new Halo title - Infinite - on Day One, a huge deal given that despite Halo being a core part of Microsoft's games brand, there actually hasn't been an entry in the franchise launching alongside new hardware since the original Xbox in 2001.

As we said earlier, Microsoft is positioned to kick ass and take names in the next generation of games. The firm has the tech, the content and the development strength to do something truly special in the coming years.