"We want to create our industry ourselves": Why Switzerland's young games scene doesn't need an EA or an Ubisoft 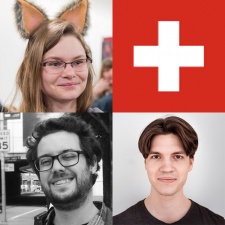 Switzerland might have one of the most unique games markets in the world.

Though it boasted a bustling community developing for the Amiga back in the 1980s - dubbed the 'demo scene' by Swiss nationals - this simply disappeared overnight. Those involved were young and ultimately went on to get jobs, killing what games community there was.

Thus the industry in 2019 is very young. There isn't the experience that most countries can lay claim to with older names like Id Software, Eidos or Creative Assembly.

According to stats shared in a presentation by SGDA president and Stray Fawn co-founder Philomena Schwab (pictured, top left), the vast majority of Swiss studios are less than ten years old.

"When looking at the amount of years in business, we can see that quite a few studios have been founded very recently," she explained.

"There are some that have been sticking around a bit but we can see that there is almost no 'old' industry here; we had developers making games for the Amiga, it was building up but it was mostly very young people who went on to get jobs and that removed the whole games scene from Switzerland and we had to more or less start up from nothing again, compared to other countries who actually made the transition."

As such there isn't much in the way of experienced talent. Blindflug, of First Strike and Airtheart fame, might be one of the most established, with five of its own games - as well as a further five client projects - and five years under its belt.

Co-founder Jeremy Spillmann (pictured, bottom left) does point out that Switzerland was the first European country to have a publicly funded course for games design, yielding a wealth of young and talented developers.

"There wasn't a follow-up of game studios [after the democene]," he said.

"The oldest game developers that are still around now were founded around 2005; it's very young. But funnily enough, Switzerland did have the first public-funded university that had a game design course in Europe with the ZHDK. That means that there was a lot of new game designers and there's also the tech sector with ETC (Swiss Federal Institute of Technology) so there was a lot of groundwork and now we're at the stage where there are dozens of young new companies being formed."

We want to create our industry ourselves in a way, but we really need to connect with other countries. We don't want to be self-contained, but we see a lot of potential here and we want to grow. Each studio wants to get big; if they do that then the whole industry grows

Don Schmocker (pictured, bottom right), one of the founders of Far: Lone Sails developer Okomotive - and a graduate of ZHDK (Zurich University of the Arts) - says that not all of these companies would succeed, but the more that stick around, the more experience the Swiss industry will gain.

"[The Swiss development scene] is young but very active," he said.

"We get more new studios with every year and a lot of them are students. Some fail, but more and more stay in the industry so we get more experience and we can share that. If we grow, we'll grow faster because we can help each other. And if the Swiss games industry is recognised more nationally and internationally, it may get more support long-term."

Perhaps unsurprisingly, many of these smaller start-up studios are one-person teams, but the average company size is between two to five staff - according to SGDA's research - and there are very few who have six or more people on-board.

For Blindflug's Spillmann, one of the main concerns about the industry is that many of the new studios that are emerging are working from project-to-project with little in the way of long-term stability. Blindflug, for example, makes games for clients in addition to its own titles, but the co-founder says there needs to be more support from the state as well as other investment to mediate the risk most studios are taking on.

"There's an inherent risk of studios working from title to title," he explained.

"There's a lot of potential in the scene growing and getting to a more stable point, but it is a bit shaky right now. Still, it's very creative and there's lots of games with a number of awards and accolades. It's interesting, but needs to think globally. We know that we can't develop for Switzerland alone; it's just not possible. The country is just too small. Music and cinema have the same problem, too. That's why everyone is so active in going to GDC and trying to meet people; thinking globally."

He continued: "What we need is public-private partnership; development subsidies for studios that get investment from angels. There are a lot of business angels in the country but none of them are from the games industry because there is no old games industry here. They might be vaguely related - from tech, for example - but a lot of them feel very uncertain about games, because it's not their area. This is where the government could help tremendously; all of these companies that are here now, they now need to get to a point where they can develop multiple projects and to spread out the risk because if we keep developing from project-to-project, a lot of these new young companies will die no matter how good their sales on the initial projects would be because it is a high-risk area of work."

Okomotive's Schmocker feels the government should provide more support, also, as well as greater insight and some big names to attract global attention.

"One is better funding from the state because compared to other countries we don't have that much support. We need more experienced people; they may come from the outside to share what they know, especially people who have specialised knowledge because we don't have that here really. And we need to create a really big studio or name that other countries will be able to go: 'Hey, that's Switzerland'. We have one in Giants, but they are very specialised on the simulation genre. There are a lot of simulation games made in Switzerland, but we also have really great indie games - we want to create high-quality games."

When looking at other games scenes, such as the UK, Canada and even Italy, one of the big ways that these countries have helped grow a development and publishing community is financial incentives such as tax breaks. For Switzerland, this is different due to its rather low tax culture.

As a result, many of the Swiss developers we spoke to say that the local scene - the small start-ups of today - is going to be the triple-A powerhouse companies of tomorrow. Furthermore, they don't see much value in having an Ubisoft or EA setting up development houses.

"I'd expect the local scene to develop. I don't personally see any huge value in a big company coming into Switzerland. It would create jobs, but in the end I would say you could end up in a situation like Finland had with Nokia," Spillmann said.

"We already have two studios who are on the brink. One of them, Giants, is already huge off the back of Farming Simulator, and there's also the folks from Train Fever, who are getting pretty big. Not everyone is going to survive but some of the studios becoming bigger and trying to go the route of a Supercell or something and having an influence on new teams that are coming up and being able to work for the specific needs that they have. That being said, the governmental support from Pro Helvetia [an organisation that funds art and culture in Switzerland] is already great. It's helping us with networking with the bigger studios, or having coaches trying to help us get our pitches and our sales better. There's a lot happening and that's the reason why it's making major strides forward."

Okomotive's Schmocker added: "We don't talk about getting big studios to come here really. It would be nice, but we had Ubisoft here and they left a few years ago. EA's presence here is really small. We want to create our industry ourselves in a way, but we really need to connect with other countries. We don't want to be self-contained, but we see a lot of potential here and we want to grow. Each studio wants to get big; if they do that then the whole industry grows."

But there is real talent in Switzerland with a development scene that unites creativity with cutting edge technology. Look no further than FaceShift, the Swiss company that was bought up by Apple in 2015 and whose work now powers the Animojis that Apple has featured since iPhone X.

Then there's Unrailed from indie studio Indoor Astronaut (pictured, above). This was a student project at ETH, which ended up being picked up by German publisher Daedalic.

There is a bright future ahead of the Swiss games industry, but it is going to get there on its own terms.

Disclaimer: Presence Switzerland paid for PCGamesInsider.biz's flight and accommodation for this trip