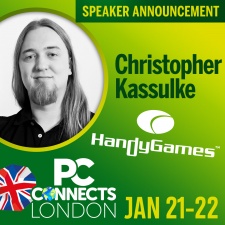 Today Handy Games CEO Christopher Kassulke tells us why this is the best time to work in the games business.

HandyGames is a THQ Nordic family member and operates as an international publisher for small and mid-sized projects and developers for a worldwide audience. The focus lies on creating and publishing games for consoles like Microsoft Xbox One, Nintendo Switch and Sony PS4 as well as games for Steam and many other PC gaming distribution channels. HandyGames™ produces titles for new innovative gaming platforms, for example, VR on Oculus Rift, HTC Vive and Samsung Gear VR, but also offers games of all kind of genres for Android smartphones and tablets, Apple iPhones, iPads and many other mobile and smart devices.

As a games company and that is truly passionate about gaming, we always strive for gameplay innovation. We received the German Developer Award as “Best German Game Studio” in 2015 and produced and published award-winning games of virtually every video gaming genre imaginable for a diverse range of audiences and gameplay styles. One example is “Townsmen VR” which was awarded with the German Games Award 2018 in the category “Best Game Design”. Located in beautiful Giebelstadt in the north of Bavaria and close to the university city of Würzburg, HandyGames™ is a proud part of the German and European gaming scene.” .

To develop awesome games and kick some ass.

Stop talking just do it.

Best time to be in the games business.

The industry is changing every 180 days... never stand still

The parties as the best business is done with a beer in your hand.