Backpack Attack – The Rise Of The Wearable VR PC 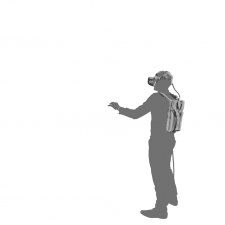 The one thing that bugs us about high end VR right now is the umbilical cord that binds you to the processor. You can never quite forget it’s there and even a tiny thing like that can draw you out of an otherwise completely immersive experience. While most of us are busy swishing our tails like fly-stricken horses, some people have gone to the lengths of ceiling hooks, bungees and shock cords to tame that cable.

Computer hardware manufacturer MSI has taken another approach entirely by putting the PC right on your back. Debuted at this year’s Tokyo Game Show, the VR One provides tetherless VR powered by NVIDIA 10-series GPUs with a hot-swappable battery to keep those sessions going. Each battery will last 1.5 hours and since MSI claims VR One is the lightest device of this kind so far at 3.6kg, you should be fresh to stick with it. Although the VR One has the IO to support any PC headset, it’s been designed with the HTC Vive’s room scale in mind.

MSI isn’t the only hardware firm developing backpack PC hardware though. HP showed the world its Omen X VR PC Pack earlier this year and the company is now working with developers to refine the system. We know that like the VR One, it also has two hot-swappable batteries, but HP has yet to announce which GPU it will include. The Omen X weighs in at a not unreasonable 4.5kg.

Then there’s the ZOTAC ZBOX (capitalisation manufacturer’s own!) from China. Which looks like, well, one of the firm’s small form factor PCs literally in a backpack.

And if you don’t want to wait for any of those backpacks to hit the market, you can already pick up the XMG Walker for a mere £4,100.

Will many consumers be willing to spend such a sum on an extremely specialised set-up? MSI hasn’t announced a price or release date for the VR One, but since its own GTX 10-Series laptops come in at £2,500-£5,000, it won’t be cheap. A backpack PC almost made sense before laptop GPUs were capable of running VR, but with the 10-series powering MSI’s own impressive GT83VR 6RF TITAN SLI, why not just throw that in a well-ventilated backpack? It’s hardly lardy at just 5.5kg itself – and you can use it to watch clips of kittens when you’re not in VR.

It also remains to be seen how the various manufacturers solve the problem of firing up your PC and launching your chosen VR app without being plugged into a monitor. And a keyboard and mouse. Will users be forced to plug in, only to unplug again each time they enter or leave VR? Of course for keyboard and mouse, you could always go wireless...

...And there’s the word that could make every PC backpack redundant before it’s even released: wireless. While wireless is yet to be capable of supporting VR, Valve has entered into a partnership with Bulgarian company Quark VR, that may soon make it a reality. The two companies are working on creating a Vive with wireless connectivity, using a pocket transmitter that’s also likely to house a battery to power the headset.

While the headset would still have a cable, it would only need to extend as far as the user’s pocket or belt where the breakout box can relay data to/from the PC base unit. This set-up would be a huge advance over the present tethered situation and removes the physical obstacle that breaks immersion, but the question remains whether wireless can carry data fast enough to avoid any slowdown that could cause motion sickness.

Will the hardware manufacturers that are racing to bring their backpack PCs to market manage to launch before Valve and Quark have cracked the problems with wireless? And how would the experiences compare? We watch this space with interest to see how it develops.

Steve is an award-winning editor and copywriter with 20 years’ experience specialising in consumer technology and video games. He was part of a BAFTA nominated developer studio as project manager for the UK’s first fully interactive digital TV channel. In addition to editing TheVirtualReport.biz, Steve contributes to PocketGamer.biz, PCGamesInsider.biz and BlockchainGamer.biz, as well as creating marketing content for a range of SMEs and agencies.

Players are the winner in Microsoft's Bethesda acquisition, founder says