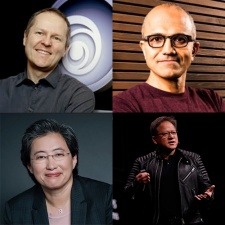 Employer review site Glassdoor has released its list of the Top CEOs from different regions around the world.

This year, the games industry has several execs making the cut, with both Microsoft's Satya Nadella (top far right) and Jen-Hsun Huang from Nvidia (bottom far right) coming in the No.6 and No.18 spots respectively in the USA Top 100 list. Nadella had a 98 per cent employee approval rating, while Huang had 96 per cent.

Over on the Canadian Top 25 is AMD's Dr Lisa Su (bottom right), claiming both the No.1 spot and 99 per cent employee approval. Ubisoft CEO and founder Yves Guillemot (top right) claimed a 98 per cent rating, and takes third place. Satya Nadella makes another appearance, clocking at No.8 with a 96 per cent approval.

No 'pure' video games companies made the cut on the UK list, but Google's Sundar Pichai made No.24 on the rankings with a 94 per cent approval, with Nadella coming in 49th position with just 90 per cent approval.

Meanwhile, the German and French lists are entirely clear of video games execs.