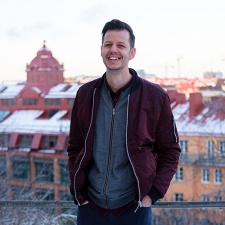 The Stockholm-based studio behind Goat Z and Waste of Space spin-offs of Goat Simulator is going to be rebranded Coffee Stain North. The exact sum of money is not disclosed.

“We discovered Gone North Games when they pitched us on their first game - A Story About My Uncle, and we saw a lot of potential in their team already back then,” Coffee Stain CEO Anton Westbergh said.

“The game ended up being our first foray into games publishing, and a successful one at that! Since then the talent behind Gone North has played a major part in carrying the Goat Simulator brand into the future through their seemingly endless creativity and vision. We welcome them into the Coffee Stain group with great excitement to soon be able to share more on their upcoming project."

Gone North chief Sebastian Eriksson (pictured) added: “When we first approached Coffee Stain we already knew we had a lot in common. And over the years we’ve worked together we’ve discovered a deeper personal connection in everything from humour to game design sensibilities. All these commonalities have given us true creative freedom, and with the resources and support of Coffee Stain we’re currently working on our biggest project to date."

Coffee Stain rose to prominence with 2014's Goat Simulator which went on to be a big hit the firm. Last year the company announced its intention to support other developers with its new publishing arm, hiring Mojang alum Dan Kaplan to this end.

Only yesterday did it announce a fund to encourage greater gender diversity within games development.