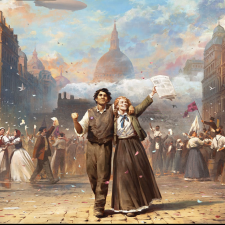 Grand strategy sim Victoria 3 has shifted over 500,000 copies since its launch back in October.

That's according to publisher Paradox Interactive, who revealed that players had spent over 14,623,631 hours with the game.

The Swedish firm points out that this is 1669 years in total, which is admittedly pretty mad. It also means that – on average – users have spent just over 29 hours playing the game since its release on October 25th.

“Seeing Victoria 3 nominated for this year’s Game Awards is a career-defining moment and we couldn’t be happier to share this achievement with our players,” Paradox game director Martin Anward said.

“Our players made all of this possible and it’s only the beginning. We are committed to supporting Victoria 3 and will continue to add more content to the game.”