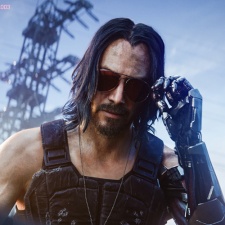 That's according to the company's financials for the three months ending September 30th, 2022, in which the firm reports that it made 245.5 million PLN ($54 million) in revenue for the quarter. Its development arm – CD Projekt RED – saw its revenue almost double, rising 96 per cent to 205 million PLN ($45 million). That's due to continued strong sales of Cyberpunk 2077, which were boosted towards the end of the quarter by the launch of the anime Cyberpunk: Edgerunners on Netflix in early September.

The company reported that the dark sci-fi RPG had sold over 20 million copies in September.

“Although we had strongly believed in the success of the series, its debut exceeded our expectations," CD Projekt CEO Adam Kicinski said.

"In its premiere week, our anime hit the Netflix Top 10 in 19 countries. The popularity of the series and the positive reception of the 1.6 update to Cyberpunk 2077, released a week earlier, had a measurable impact on the game’s sales. At the end of September, we proudly announced that the game had been purchased by more than 20 million players. We are pleased with the synergy created by the expansion of our franchise.”