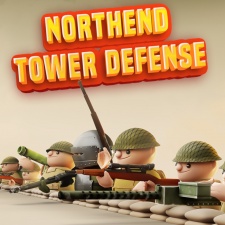 After three years Pocket Gamer was finally able to return to Jordan, this time heading to the Dead Sea. Of course, this also meant the return of the Very Big Indie Pitch. The Very Big Indie Pitch is our bumper edition competition where even more developers are able to pitch an ever-increasing range of brand new and diverse gaming experiences from some of the most exciting indie developers, not only from across the globe.

As always, the developers gave it everything they had in order to walk away as the winner. An award that was eventually bestowed upon Northend Games' Northend Tower Defense. Though it is certainly worth highlighting how well-received our runner-ups Amira and Attract Of Legends were. Want to know more? Well luckily, you can learn more about all three games right here.

Northend Tower Defense looks to innovate on both the strategy and tower defence genres, doing so by offering real-time action gameplay and the ability to take instant decisions in order to change the flow of a battle. Of course, that's not all though, as players will also be able to mix and balance different equipment and troops, make use of the varying terrain across 8 different levels, and choose where to place their soldiers in order to tactically defend their base. On top of that, Northend Games have built the game in such a way that each round promises to perfect blend of uniqueness and challenge. It also looks stunning too.

Amira is a story-driven action RPG set in a middle eastern-fantasy in which players step into the shoes of a girl who one day whilst protecting her family's land, accidentally discovers that her life has already been prewritten. As such, she decides to venture into a world filled with monsters and traditions in order to find acceptance, love, and the truth behind this foretold fate.

Attract of Legends is a game centred around 21 different heroes, each with their own unique story, skills, characteristics and even mystery to solve. As each hero's story is solved, that hero in turn is able to prepare for one final epic battle against the evil that has corrupted the land. However, it will take all 21 heroes to save civilisation from this great evil.

Built by Virtual Reality Elements Studio with both PC and VR in mind, and using the Unreal Engine, Attract of Legends hopes to offer players a deep and engaging game that is equal parts story and engaging gameplay.

Dracma Studios looks to reinvent the classics through Candle Knight