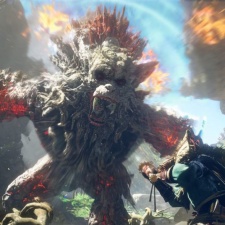 The duo is working on a brand new triple-A hunting game called Wild Hearts, which is set to be released on February 17th, 2023. The first quarter of the calendar year is generally where EA sticks games that it doesn't have much faith in but wants released before the end of the financial year – such as Mass Effect Andromeda and Anthem – though there are some notable exceptions to that rule, including 2019's Apex Legends.

Word that Koei Tecmo was working on a game with EA broke earlier this month.

“With Wild Hearts, not only did we want to showcase the evolution, infusion and real threat caused by Kemono, but we also wanted to create a game where crafting was at the core of the experience, redefining what can be possible in a beast hunting game. We have placed great care in designing our Karakuri to fit within the combat, and we’re excited for players to use these powerful mechanisms to fight giant beasts and traverse the world.”

EA's EVP for global brand Stuart Lang added: “EA Originals is a label for those who dare to explore. It’s a home for studio partners - like Omega Force - forging new ways to play from bold creative visions, and for players who love to discover untold stories and unseen worlds. We are excited to follow the wonderful and critically acclaimed It Takes Two, from Hazelight Studios, with the ingenious mechanics, giant nature-infused beasts and epic battles of Wild Hearts, the first triple-A hunting experience for a new generation.”

EA Motive is working on an Iron Man game