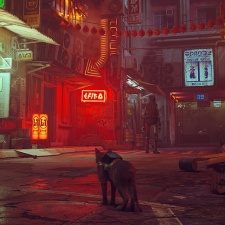 Cat cyberpunk romp Stray was once again the second-highest-grossing title on Steam.

The game was released back on July 19th and has been curled up in second place ever since. The only thing that has been keeping Stray from the top spot was Valve's own Steam Deck hardware. This has been making the most money on Steam for some time now, largely because of its high RRP and the sizeable demand behind the console.

Pre-orders for Marvel's Spider-Man Remastered were the third highest sellers on Steam last week. The title launches this coming week, on August 12th, following its initial PlayStation 4 release back in 2018. They were the fifth biggest seller the previous week, rising two places to No.3 this most recent week, which is a strong indicator of the sheer hype around this game.

The Steam Survival Sale brings a number of titles from that genre back to the Top Ten. Rust from Facepunch returns to the charts in fourth thanks to a 50 per cent price cut, while fellow survival title Raft rises up four places to No.5 after a 15 per cent price cut. Meanwhile, The Forest from Endnight, saw a 75 per cent price cut and charted in sixth and Project Zomboid came in ninth after a 30 per cent reduction.

Elden Ring hangs steady in seventh ahead of Valve's Index VR Kit, which drops two places week-on-week to eighth. Once again rounding off the Top Ten is Grand Theft Auto V from Rockstar.

Here is the Steam Top Ten for the week ending August 6th: