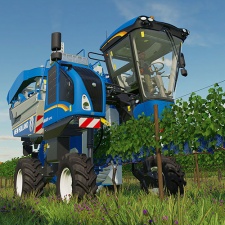 The latest entry in the Farming Simulator franchise was the best-selling game on Steam last week.

Farming Simulator 22 shot to No.1 following its launch on November 22nd and boasted a high of 96,402 concurrent players earlier in the week, per SteamCharts.

Giants Software's title comes in ahead of Battlefield 2042, which was released on November 19th amid a wealth of technical problems. Speaking of, Cyberpunk 2077 from CD Projekt makes a return to the Steam Top Ten in third place thanks to a 50 per cent price cut as part of the platform's Autumn Sale.

Fellow open-world title Red Dead Redemption 2 also makes a return to the charts also thanks to a 50 per cent price cut, while Valve's Index VR Kit charts in No.4. Forza Horizon 5 raced into sixth, ahead of the Complete Edition of former PS4-exclusive Horizon Zero Dawn at No.7. FIFA 22 takes ninth, while Myth of Empires rounds off the charts in tenth.

Here is the Steam Top Ten for the week ending November 27th: