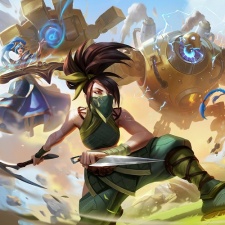 Developer and publisher Riot Games has removed the /all chat functionality from its hit MOBA League of Legends.

The firm announced the change in a blog post, saying that in the upcoming patch 11.12 it was disabling the /all chat function in matchmade queues. Riot says that it has taken this step due to people using this in a negative way, which the company explains outweigh the positive interactions that players have with /all chat.

Players on the same team will still be able to communicate, though Riot does realise that this does leave room for toxicity to persist.

"Regarding that last one, we're aware that verbal abuse happens in team chat too, so disabling /all chat won't get rid of abuse altogether," director of production Jonathan 'Brightmoon' Belliss said.

"But team chat also plays an important team coordination function, so the potential value it brings is much higher, even if it can also host some negative experiences."

This is the latest step that Riot has taken to try to stomp out – or at least reduce – toxicity in its games. Last year the company committed itself to dealing with negative behaviour in its team shooter Valorant after an employee posted a video of harassment in-game. Riot also said that it would not stand for bullying in its titles.

“Talking to players as a developer is scary and intimidating,” says ex-Riot employee