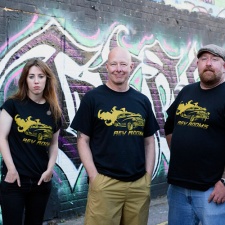 The venture is being headed up by (pictured, left to right) technical director Gwen Raymond, director Gavin Shepherd and audio director Andy Gibson.

"We have been so fortunate to bring such a strong team together at Rev Rooms," Gibson said.

"With the vast raft of experience we have within the team, we have a unique proposition: not only in crafting enthralling in-game sound but also in making that work seamlessly with the rest of the game. We work with Wwise, FMOD, Unity, Unreal, Lumberyard, and a host of bespoke engines.

"We have all worked in small and large studios and know how important it is for outsourcing companies to become as much a part of the development team as possible, delivering integrated audio without pain or friction."

Raymond added: "What we bring to the table is not only world-class audio design but also the technical chops to bring it into the virtual worlds of games. Programmers who are both adept at writing clean, robust and efficient code, but who also understand and are passionate about audio and the role it plays in player immersion."

Rev Rooms is based in Brighton in the UK.