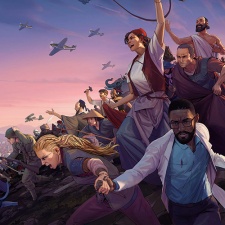 The much-anticipated title launched on August 17th and shot straight to the top of the charts, deposing last week's No.1 holder, battle royale game Naraka: Bladepoint. That project, from Chinese publisher NetEase and developer 24 Entertainment, dropped to second place in its second week out in the wild.

Valve's Index VR Kit came in fourth place, while the Deluxe Edition of Doom Eternal takes No.5 thanks to a QuakeCon sale on Bethesda titles. That also helped the Crown Packs of in-game currency for The Elder Scrolls Online chart in sixth, while Fallout 4: Game of the Year Edition came in ninth.

Here is the Steam Top Ten for the week ending August 21st:

How Amplitude built up to making its dream project Humankind