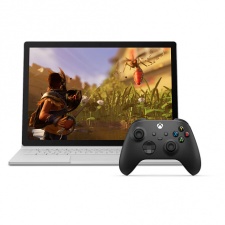 Microsoft today launched the beta test of its Xbox Cloud Gaming service for Windows. Available now to Xbox Game Pass Ultimate members in 22 countries who are part of the Insider program, gamers will be able to stream sessions from the cloud Windows desktops and laptops, as well as tablets and smartphones running the OS.

The service will offer over 100 Xbox console games, enabling owners of even the most potato-PCs to play the latest releases. All they will need is a decent internet hook-up and a bluetooth or USB controller. As Jason Beaumont, partner director at Xbox Experiences said in a blog post today, "It’s our continued goal to make gaming available to all players around the world, wherever you are, on the devices you want".

Another benefit includes the ability for users to resume a saved game previously started on Xbox console, which could be ideal if the need arises to shift rooms - or even houses - mid-session. Cloud gaming will also make it possible to try new games from the Game Pass library before deciding to download them.

Microsoft’s xCloud lets you stream Xbox games to your PC, smartphone and console