Rain on Your Parade shines at the Digital Big Indie Pitch, and walks away with the crown 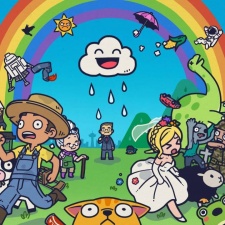 Most recently that meant hosting our most recent Big Indie Pitch at Pocket Gamer Connects Digital #5 sponsored by Kwalee & Xsolla, in order to highlight the best and brightest indie developers we can both discover.

This time around we saw 14 exciting and interesting indie developers pitch their latest works to some of our most established judges and journalists. As always, the competition was extremely tough. Nevertheless, the judges did, in the end, settle on two honourable mentions, a top three, and within that top three, one winner. That winner was the slapstick comedy action-puzzle game Rain on Your Parade. A game which you can read more about below.

Of course, Rain on Your Parade, as you already know, was the winner, but if you want to learn more about not only Rain on Your Parade but also our runners-up The Digital Big Indie Pitch (PC+Console Edition) at Pocket Gamer Connects Digital #5, then simply read on.

1st Place - Rain on Your Parade by Unbound Creations

In Rain on Your Parade, you take control of a mischievous cloud who is on a global coast to literally rain all over everyone's parties. Within the gameplay, players will be able to utilise an ever-growing collection of different methods of causing mayhem and destruction in short and sweet levels.

Of course, on top of causing some comedic chaos, each stage also has a variety of unique objectives for you to aim for. All in all, Rain on Your Parade is a lighthearted slapstick comedy game where ruining fun has never been so much fun.

Brutal Grounds is a competitive top-down ball-rolling arena shooter in which players make use of hundreds of weapons a plethora of skills, and more than 200 unique load-out combinations in order to battle it out for the crown. What's more, players can expect more than just deathmatch mode too, with other classic battlegrounds such as Capture the Flag, and King of the Hill also being featured.

In addition, Brutal Grounds has been built with today's eSports and the streaming game community at the forefront, and as such includes full spectator and caster view controls. It's also a game that focuses solely on the gameplay by removing the hero component and instead places all its attention on thoughtfully designed maps that require a high level of situational awareness, creating a play-style that relies not only on skill, but also map strategy, area control, passing, and team-play.

3rd Place - Assimilate! (A Party Game) by Friendship is Fun

In Assimilate! anywhere from 5-10 players play together online, locally or a mixture of both in this 50s-themed, social deduction party game. One all about a cleverly-disguised robot attempting to infiltrate a local, "humans only" gathering.

Of course, as with most party games, players will be able to utilise their phones as controllers in order to play along from literally anywhere in the world. So grab a drink and join in as you try and work out just who amongst the team is the imposter.

Grimoire Groves is a non-violent roguelite, one in which highly relatable and loveable witches solve a mystery and restore balance to a magical forest. Of course, as you would expect the game has a huge focus on story and exploration, but on top of this, by replacing violence with restoration, developer Stardust are looking to create a new style of gameplay in a well-established genre, whilst also making it accessible to a younger and new audience.

Booper Get Home is a very special kind of game. One which is hopes to highlight the experiences of autistic children and even features art assets created by a kid on the autism spectrum.

In the VR puzzle-platformer, players must help Booper to return home. However, this isn't as easy as it seems when you can't speak. Nevertheless, Booper is lost and needs help to solve puzzles, make friends and ultimately get home.