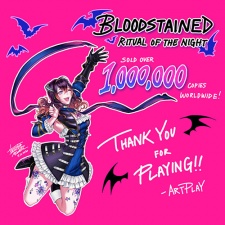 Castlevania spiritual successor Bloodstained: Ritual of the Night has sold more than one million copies since its launch in June 2019.

In a post on the game's website, developer ArtPlay revealed the milestone and thanked its community for playing. Furthermore, the studio outlined its plans for a second year of content for the title, including a new boss revenge mode and vs mode.

This follows the Randomizer mode that was launched in March of this year. At the time, publisher 505 apologised for not being able to deliver some of the stretch goals it had promised if the game hit $5m in funding on Kickstarter.

"This is a remarkable milestone for any game, but it is especially sweet considering the humble beginnings of the project," ArtPlay said.

"Bloodstained wouldn’t exist without the passion and faith of the many Kickstarter Backers who made the game a reality. What started as a small idea quickly turned into a phenomenon with more backers and support from the community than we could have ever expected.

"We want to thank all the game’s fans for being a part of this amazing journey and for making Bloodstained: Ritual of the Night a global success.

"We have a full slate of free updates planned that will take us through the rest of 2020. We are excited to share the Development Roadmap with you so everyone can see what is coming to Bloodstained over the rest of the year."