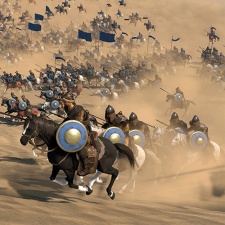 Bannerlord, developer TaleWorlds' sequel, launched at the end of March following a long time in development. The title was announced back in 2012 before a Steam page was created for the game in 2016. Its March 30th, 2020 release is just the start of the journey as it has launched into Early Access.

Second and third places in this week's charts both go to Capcom's Resident Evil 3 remake. Well, the No.2 spot goes to Resident Evil 3 while No.3 is taken by Biohazard RE 3, while is how the title is named in Japan. The release follows 2019's smash hit remake of Resident Evil 2, which has shifted more copies now than its 1998 original.

Bethesda's Doom Eternal drops to fifth place in this week's chart. The title shot to the top spot in the Steam rankings on launch, and No.1 was missing from last week's Top Ten so it's entirely possible it was at the head of the charts then, too. The shooter hit 104.9k concurrent users on Steam when it was released.

Football Manager 2020 from developer Sports Interactive and publisher Sega Europe made it to No.6 in the charts this week. Sales of the game have skyrocketed since the middle of March, possibly indicating that people are snapping up the title in lieu of football being on the television due to social distancing guidelines over the COVID-19 coronavirus.

Seventh place goes to Xbox Games Studios' Halo: The Master Chief Collection. This is likely the result of the sale on titles from the publisher on Steam at the moment, with the sci-fi shooter being 20 per cent off.

Tabletop Simulator comes in at No.8, while Half-Life: Alyx has dropped from last week's second place to ninth in this Top Ten. That potentially indicates that the bulk of sales in the VR title's launch week was pre-orders, with the number of copies shifted in subsequent weeks slowing down. Given that it's a virtual reality title, there is a ceiling on how many people actually can play the game, so it's no surprise that sales have slowed down.

Below is the Steam Top Ten for the week ending April 4th: