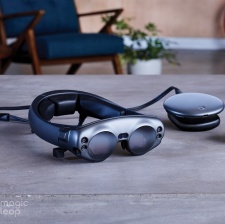 That's according to The Information, which claims that staff were made redundant following weaker-than-expected sales of Magic Leap's hardware. The firm had hoped to shift 100,000 units in its first 12 months on sale but in six months had sold, um, only 6,000.

Speaking to GamesIndustry.biz, Magic Leap claims that The Information's reporting is "littered with inaccuracies and misleading statements." Oh, and The Information itself has reported that Magic Leap marketing boss Daniel Diez has described its reporting as "a bunch of bullshit."

The firm has also announced a new version of its Magic Leap One Creator Edition hardware, dubbed Magic Leap 1. This will retail for $2,295. The Verge reports that a fully-fledged follow-up - imaginatively called Magic Leap 2 - is set to be rolled out in 2021.

AR firm Magic Leap lays off employees at "every level"