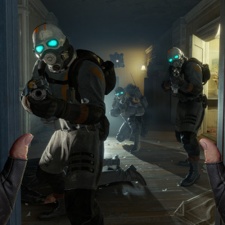 In a video interview with The Game Awards' Geoff Keighley (below), the studio said that the title began as an internal VR experiment before it became a Half-Life game, with the title becoming exclusively for virtual reality due to the level of interaction it gave users with its world.

"When you can track your hands separately from your head. They're all 3D space, all simultaneously tracking and moving, you just can't really get that with a mouse and keyboard. And when you put that into game mechanics, the kinds of interactions that we can do now we couldn't possibly do with a mouse and keyboard. Like interacting with doors is one of the most obvious things, I mean you've played so you've seen. No, but it's so fun, and I think the thing with what I'll say about the combat stuff is when, you know, you're pulling a clip and put it in the gun, and ducking for cover, I mean there's funny videos of me playing this thing where you're literally on the floor and ducking, I mean it's like the combat is truly immersive and visceral and it reminds me of classic Half-Life, but it's so much different, and I mean you could potentially map some of that to a mouse or a controller but it's just, I think it's just better."

This project follows Valve's return to game development last year with Dota card title Artifact. That game, sadly, bombed after release with the studio promising a complete overhaul in the future.

Valve is getting ready to unveil VR title Half-Life: Alyx