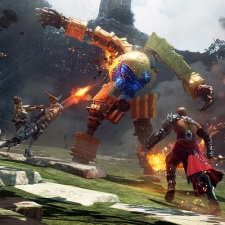 International markets generated 69 per cent of the company’s sales, up from 67 per cent the year prior. The company aims to pull in 80 per cent of its revenue from abroad by the end of 2022.

The publisher’s largest markets are said to be the US, Germany and Japan, with the company setting its sights on further Asia expansion, particularly in China.

Mobile meanwhile accounted for 60 per cent of total revenue, up from 59 per cent in Q2 2018. Hustle Castle is the firm’s most successful in-house game after passing 47 million downloads in Q2 2019.

My.Games also noted that titles in its portfolio such as Left to Survive, Tacticool and War Robots helped boost its earnings. The latter title has now passed 133 million installs.

On other platforms, Warface was highlighted for its performance on PC, PS4 and Xbox One.

Free-to-play MMO Skyforge however failed to meet expectations, resulting in a "significant downward revision" of forecasted sales for the game in Q2. As a result, the group fully impaired the game, recording an impairment charge of around $10 million.

The financials come shortly after the company rebranded its games business to My.Games in May 2019, housing all of the firm’s games, services and studios under one roof.

The publisher is currently on the hunt for a development partner to make a triple-A shooter as part of its My.Studio investment initiative.

“With more projects set to release throughout 2019, the launch of our new gaming and media platform and much more, we’re confident our pattern of success will continue through Q3, Q4 and beyond,” said My.Games CEO Vasiliya Maguryan.

My.Games houses 13 internal studios and currently plans to have 18 development teams within its investment arm MRGV.

In its financials My.Games said it would be launching its own new gaming and media platform, though didn’t expand on the specifics of this.