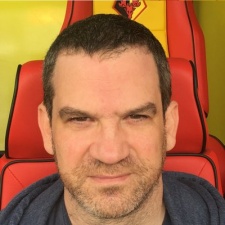 That's according to the boss over at developer Sports Interactive, Miles Jacobson OBE (pictured), who announced the sales milestone on Twitter (below). The two million-plus figure is for all platforms, not just PC, with Jacobson saying that this is the first time one of its annual releases has shifted this many units.

Football Manager 2019 is one of the 28 titles set to launch on Google's Stadia streaming platform and it is already part of the PC edition of the Xbox Game Pass subscription service.

The 2018 version of Football Manager was played by 1.2m people in June of that year alone, with a peak concurrent player count of 67,000.

The FM19 family (FM/FMM/FMT) has just surpassed TWO MILLION sales across the different platforms - the first time that one of our annual releases has done this.
Thank you all so much for your support over the years. You keep buying 'em, and we'll keep making 'em :)

1m copies of Football Manager 2017 have been sold