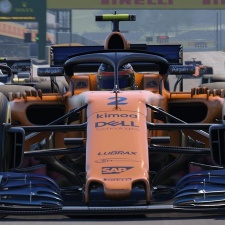 Codemasters has relocated its F1 series development team into a new two-storey office in Birmingham.

The new 14,000 square foot location is based in the city’s new Alpha Towers, with all 110 members of the team already settled in. It replaces the previous office in The Custard Factor, which had grown too small as the team expanded.

"The Custard Factory served a purpose but it wasn't the most salubrious of surroundings, and as we expanded and the F1 franchise was growing, we'd outgrown its capacity,” said head of studio Ian Flatt, speaking to GamesIndustry.

"The team was doing really well, each game was a big success so the business wanted to reinvest in the team, get us new premises so we could grow the franchise but also reward the effort that has gone in and get people feeling increasingly more proud, recruit even further to expand the franchise."

The team hopes to add another 10 or 20 employees to its roster, with a particular focus on diversifying its ranks. Codemasters’ recent Gender Pay Gap report revealed that the company workforce is 90 per cent male, something Flatt is keen to amend.

"That's our biggest problem," he said. "We're very keen here to expand diversity, and we've been going to seminars, events and trying to learn how we can better publicise ourselves to get more female applicants coming in.

“But we just don't get that volume to be able to make the hires. There's a lot of talk about unconscious bias, but if there's nothing in the pool that's coming in, then there isn't any window to do that.”