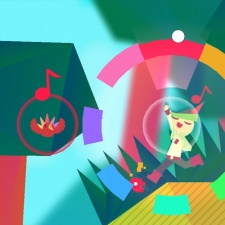 It looks like Wandersong's glowing reception landed the game a five-month Steam hiatus.

Steam's listing for the cutesy musical side-scroller was heavily restricted, locking a number of features, as it appeared that the platform believed the game's glowing praise hinted at a potential scam or fake game.

The developers tweeted yesterday claiming that the game’s overwhelmingly positive reviews were flagging it as a potential bot trick, and many basic features were yet to be enabled while Steam was “learning” about the game.

Wandersong's steam reviews are so good that Valve doesn't necessarily believe it's a real game, and still haven't enabled many basic features for us in case it's a bot trick. BUT IT'S REAL. https://t.co/wRZVo1LKtL pic.twitter.com/XqEzQKKP5x

While in this state, Wandersong would not appear on player profiles. Steam later clarified that the game had been flagged for approval, passing its metrics with flying colours - which was way, despite the limitations, the game’s creators could release trading cards.

The real culprit lay in a bug stopping Steam’s store pages from updating, leaving Wandersong’s listing in an incomplete state. The issue has since been resolved, and Wandersong’s place on Steam should be working as intended.

Creator Greg Lobanov sees the fun in the situation, however. Despite the fiasco, it doesn’t appear that Wandersong’s sales were affected.

“It would have been nice for a human to intervene before the problem grew to comedic proportions, but in the long run it didn’t impact THAT much, so I’ll choose to keep laughing about it like I was at the start,” said Lobanov, speaking to Kotaku.

Could EA be returning to Valve's storefront

Valve has updated how discovery works on Steam

Steam axes video content as it refocuses on gaming