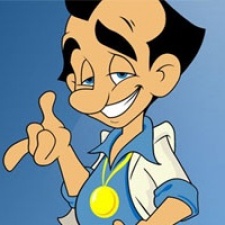 Activision has killed an online auction for floppy disks containing the original source code of Leisure Suit Larry 1 and 2.

The two disks were a part of a number of old game development artefacts placed on Ebay by series creator Al Lowe a few weeks back. There was demand for the disks too - with confirmed bids reaching $11,000 for the first Larry and $10,211 for its sequel.

But it appears series publisher Activision quietly killed the auction without notice or statement. PCGamesN was contacted by a fan of the Sierra Gamers Facebook page, Britton Matthews, who had spoken to Lowe over the phone.

“He received a letter from an outside law firm hired by Activision that ordered him to take it down,” said Matthews, in an email to the outlet.

“He said in the letter Activision understood they don’t own the IP to LSL but that the source code probably contained shared code to King’s Quest and Space Quest. For that reason, they sent him the letter.”

Activision no longer owns the IP to Leisure Suit Larry. After passing hands many times, the franchise now belongs to German publisher Assemble Entertainment. But Matthews speculated that Activision’s hands were forced by copyright law, and would need to shoot down this auction to protect any future events where IP it actually owns is threatened.

Matthews continued: “Al and I agreed that he was right, but by the time you hire an attorney to prove you’re right, it would have cost more than what he would have got from the auctions.”

Lowe himself jokingly suggested to PCGamesN that he could perhaps give ownership of the disks to Activision and charge them a negligible storage fee. When announcing the auction, many fans suggested putting the code on an online archive or donate the disks to a museum. Given Activision’s protective messaging, both seem unlikely now.