Remedy's Alan Wake is getting the TV series treatment 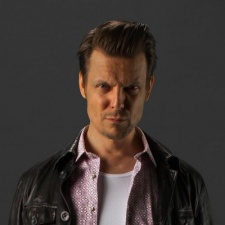 2010 video game Alan Wake is being adapted into a TV series.

Variety reports that Legion and Cloak & Dagger vet Peter Calloway has come on board as showrunner and writer, with the game's creative director Sam 'The Actual Face of Max Payne' Lake (pictured) taking on an executive producer role.

The title was a cult hit and fans have been desperate for a follow-up for some time now.

The show hasn't been picked up by any studios just yet, but apparently, there is interest.

“Alan Wake was basically a TV series that was put into a game,” said Contradiction Films' partner Tomas Harlan.

“That was Sam’s vision. It was influenced by The Twilight Zone, Secret Window, Hitchcock, Northern Exposure, a lot of U.S. television,” he said. “We plan to work closely with Sam on our this show. Sam is a huge part of this. This is his baby.”

Lake added: “Definitely what we have mapped out is a longer thing than the first game and a sequel; there is more to it. In many ways, we see the universe as a bigger thing. Alan Wake is a very central character, but we have other characters around him like [friend and agent Barry Wheeler] and his wife Alice and Sheriff Sarah Breaker and other characters there. We feel this is a big universe to develop and explore in many ways.”

Since Alan Wake, Remedy launched the Microsoft-published Quantum Break in 2016 and is now developing new IP Control which is set to be released by 505 Games.

Speaking to PCGamesInsider.biz, comms director Thomas Puha said the studio wanted to make up for the former's botched PC launch with this new project.

As well as Control, the Finnish studio is developing a single player campaign for South Korean firm Smilegate's sequel to Crossfire. Between these two titles, Remedy's biggest years might be on the horizon.