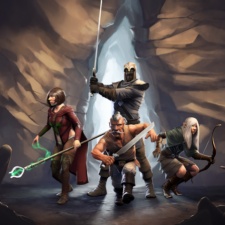 Teams get the opportunity to get valuable feedback on their games, as well as win great prizes such as promotional packages and, more importantly, the coveted PC Indie Pitch bat.

Taksing top spot at this year’s Pocket Gamer Connects Helsinki was Random Potion’s superb cooperative RPG Project Scoundrels. Described as a blend of Baldur’s Gate, Vermintide and roguelikes, players get to explore procedurally generated dungeons, defeat the monsters that lurk within, all the while completing the personal quests of the title’s colourful cast of characters.

In second place was the ambitious Kingshunt by Vaki Games. The 5v5 third-person MOBA-esque fantasy-themed title harnesses Improbable’s SpatialOS technology to enable huge battles, with up to 100 players fighting concurrently in the same world, competing in their own battles. But while they fight, players can also affect the outcomes of other battles.

Polysmart took third place at the PC Indie Pitch with Veterans Online, a top-down free-to-play shooter, packed full of fast-paced chaotic action. But that’s just the tip of the iceberg, players can make a whole raft of customisations to their characters - each of whom has their own stories to tell.

Want to show off your exciting new game? We host PC Indie Pitch and Big Indie Pitch events throughout the year, so be sure to keep an eye out on our events page for an event near you.