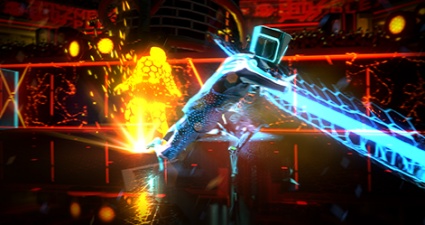 UK studio Roll7 has handed the developer reigns for Laser League over to publisher 505 Games.

The news was announced in a pair of blog posts from each company, in which they said that 505 would be handling development and support for the sports title moving forward. Roll7, meanwhile, is taking a break from games development.

"After OlliOlli2 and Not A Hero, we set out to create something far more ambitious than we had ever done before," Roll7 said.

"From its humble beginnings as Ultra Neon Tactics, Laser League grew into something we are incredibly proud of and something that our players have found immense enjoyment in over the past seven months and beyond. It’s been amazing to see people getting into the game and getting really good with it.

"We can’t wait to see where Laser League goes next with 505 Games at the helm and we thank them for their immense support and incubation of this project. At its heart, we believe Laser League is one of our greatest titles yet and we are excited for what the future holds for it.

"Roll7 would like to especially thank all the testers who helped improve the game and gave us feedback and for our core of players on all platforms who’ve become better at Laser League than we ever were! A huge thank-you also to all the team at 505 for their support the last 3 years and everyone on the Roll7 team who gave their time, brains and talents to making Laser League what it is today.

"As for us at Roll7, we’re taking a break. Making a game at the scale of Laser League is super hard and very stressful. It’s by no means the last thing we’re going to make, but for a moment we’re taking some time to reflect and re-energise."

Despite reviewing well and showing some real promise, the title has struggled to garner much of a playerbase - something Roll7's Simon Bennett noted in an interview with PCGamesInsider.biz earlier this year.

"We are very proud of what Roll7 and 505 Games have achieved together to this point with Laser League," 505 Games community manager Antonela Pounder said.

"A huge amount of energy has been dedicated to Laser League through the announcement a little over a year ago, multiple betas, Early Access PC launch and most recently the console release.

"Laser League is a complex game to explain but when people play it the reaction is almost universally and overwhelmingly positive. It is the game which always causes the biggest ruckus in the 505 offices. There is no wonder it is getting 9/10 review scores from even the most particular of gaming media (Hi Edge!)

"Because of its complexities, Laser League comes with its own unique challenges to convey what the game is about, something which 505 Games have tried tirelessly to overcome throughout the campaign. “What the hell is going on exactly?!”

"By far the biggest issue we have faced however is that Laser League relies on a minimum number of players in the game at any given time to ensure a decent match-making experience (a problem shared by many modern multi-player games- see Lawbreakers, Agents of Mayhem..)

"The extreme speed and twitchiness of Laser League’s unique gameplay exacerbates this problem means that we have to segregate North American, European and Asian players on different servers for decent ping times making ‘liquidity’ even harder."

Roll7 wants Laser League to be the next Rocket League