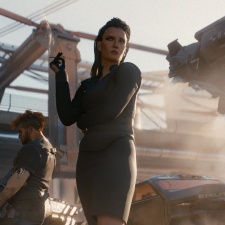 In an interview with Official Xbox Magazine, Mills was asked whether the upcoming title would be making any social or political statements. The designer confirmed, stating that politics was an inherent part of cyberpunk as both genre and franchise.

“Cyberpunk 2077 is a game about people with power at the top and people at the bottom with none", said Mills. "That power can come from money, hierarchies, technology, and violence.

The interviewer also grilled Mills on the choice to switch to a first-person perspective - a choice that attracted controversy on the reveal.

"There's a lot of things we get from first-person, and part of it is being closer to the character and to feel like you're inhabiting that character.

“But at the same time, I would also say this: go play a third-person game, go play The Witcher 3, and look up. Just try to look straight up. You'll find that the [immersion] never truly works. It never feels like you are looking up. It feels like you're moving a camera around.".

Sticking to the notion that media is political comes as a refreshing change, after Ubisoft’s Yves Guillemot firm stance that his company’s politically-charged games were never meant to make statements.

However, it’ll be interesting to see how this political storytelling pans out. Last year, CD Projekt was forced to respond to Glassdoor comments citing “Chaos” and “incompetent management”, facing allegations of crunch. Who knows, perhaps this places them in an ideal position to write on the dystopian excesses of capitalism?