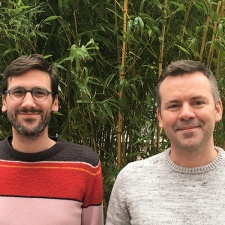 The firm has bought 100 per cent of the label's shares from Bergsala Holding… a company that actually forms half of the Thunderful Group.

Thunderful was founded in 2017, and is a collaboration between Bergsala Holding, Image and Form as well as Zoink Games. Image and Form's CEO Brjann Sigurgeirsson (right in picture) owns 25 per cent of the company, with Zoink chief Klaus Lyngeled also holding a quarter stake. The remaining 50 per cent is owned by Bergsala Holding.

Former Nintendo of Europe indie man Ed Valiente (left in picture) is taking over as managing director of Rising Star Games, in addition to his role as MD of Thunderful Publishing, having previously held roles at Sony, Square Enix, Microsoft and Bandai Namco.

“Once he knew what we were planning, getting Ed hooked on the idea was easy,” said Thunderful CEO Brjann Sigurgeirsson.

“It’s the first time we recruit from outside Sweden, so it’s been a good exercise in dealing with Swedish red tape, housing and what have you. Having him on board is absolutely delightful.”

Valiante added: “The team at Rising Star Games is very competent. We look forward to bringing in quality titles for us all to work with.”