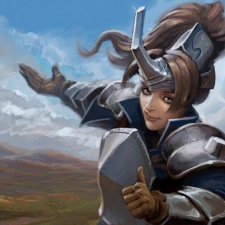 Mojang’s collectable card game Scrolls has been resurrected and renamed with the community running the show.

The Minecraft developer shut down development on the title in 2015, after Bethesda hit the studio with a lawsuit over the name “Scrolls.” Servers managed to keep going for years after development ceased, finally shutting down in February of this year.

"It's time!” said lead designer Måns Olson on the game's site. “We're releasing the game for free, for anyone to enjoy," "The team's been working towards this behind the scenes for a long time now. I'm thrilled we're finally here! To those of you who've waited patiently for this, thanks."

Mojang has given the game a new title, “Caller’s Bane”, and have re-released the game’s client. Like Minecraft, players will now have to connect to servers run by other players, or set up their own with a kit contained within the download. A side-effect of this is now, server-owners can completely mix-up the ruleset and balancing of the game.

"There's a few caveats," said Olsen "First, you'll all get the opportunity for a fresh start, as we can't bring everyone's collections of scrolls and decks over to community servers."

"But don't worry; server owners can decide to give everyone a full collection straight away, or change the gold and card distribution however they like. Second, there's no in-game friends list, as you won't be using the Mojang account system on community servers."