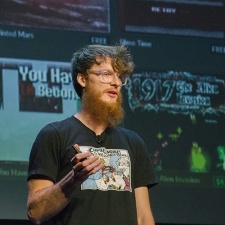 Valve announced its stance on content curation going forward last night. This follows a turmoil-filled month of school shooter scandals and kicking “sexual content” off the platform. As it happens, the company’s new approach to curation is to stop any pretence of doing so, allowing anything and everything onto Steam as long as it isn’t “illegal, or straight up trolling.” What defines trolling isn’t ever made clear, but the statement admits that Valve would rather wash its hands of content management, rather than make the changes required to clean up the service.

This clarification attracted a fair bit of criticism across the industry. Leaf Corcoran, founder of indie-centric digital distribution service Itch.io. Corcoran took to Twitter to express his outrage at the irresponsible decision, and hateful content that may find a home on Steam has no place on Itch.io.

“A platform that allows "everything, unless it's illegal or straight up trolling" is ridiculous” said Corcoran. “Please keep your malicious, derogatory, discriminatory, bullying, harassing, demeaning content off @itchio. Our ban buttons are ready.”

Continuing after the tweet gained traction, Corcoran continued: “It's sad that most of the people in that thread are worried about asset flips. What about the fact that valve is effectively authorizing toxic people to exist on their platform? It's so out of touch.”

Itch.io might not be the largest of Steam’s competitors, but has quickly gained traction among independent developers as an alternative. I use it myself to host quick experimental projects, and the platform has become a home for more marginalised developer communities. According to YoYo Games, Itch.io is the second most-preferred platform to publish independent games on.

In April Corcoran told us about Itch.io’s last five years: “I started to realise that people liked our stance and what we were doing, we have a voice in the industry among indies. It's good for us to take that and promote content.”

A platform that allows "everything, unless it's illegal or straight up trolling" is ridiculous. Please keep your malicious, derogatory, discriminatory, bullying, harassing, demeaning content off @itchio. Our ban buttons are ready. https://t.co/N021UxtfAa