Report: 33 per cent of female gamers have experienced abuse or discrimination from male counterparts 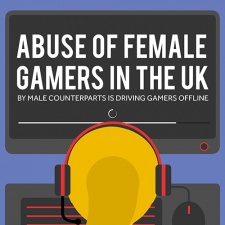 A report published by march research firm Bryter gives a shocking - but not surprising - insight into the abuse faced by women in games.

The research - which interviewed 1,151 women aged 16 or older - shows that one-third of female gamers have experienced some form of abuse or discrimination from male players.

Of that figure, 40 per cent have been sent inappropriate content or messages, 32 per cent of been harassed sexually and ten per cent have received rape threats.

Bryter's data shows that 52 per cent of those who have received abuse have done so verbally.

32 per cent experienced sexual harassment and 23 per cent had received verbal abuse offline - presumably meaning after the game was over.

The end result of this is that nearly a quarter of respondents to this survey did not reveal the fact that they were female when playing games; 20 per cent do not speak when playing online, while 11 per cent simply don't play online anymore.

Though a panel size of 1,151 for research like this is not the biggest, the results do line up with what we have heard anecdotally from women in the industry.

"The online gaming environment is one that is particularly hostile to female participation, with 63 per cent of those who said they’ve been abused or discriminated against saying it has happened in this environment. Nearly half of all gamers are women, and it is unacceptable that women are being subjected to this abuse. Our research has shown that fear of abuse is impacting on female participation in online multiplayer gaming."

A full infographic from Bryter is below:

Valve is working on a new "auto mute" feature for Counter-Striker: Global Offensive