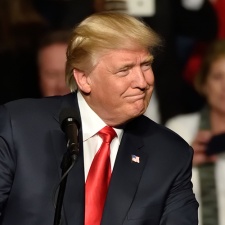 The CEOs of Take-Two Interactive and Bethesda parent firm ZeniMax Media are joining President Trump alongside the Electronic Software Association (ESA) in a discussion today about video games and gun violence.

The White House is holding a meeting with games companies and associations to talk about the relationship between video games and gun violence in America.

The ESA confirmed earlier this week that they will be attending, and ZeniMax's Robert Altman and Take Two's Strauss Zelnick have also been invited. Given that The ESA had not heard of the meeting when it was announced, it can be presumed that this was somewhat last-minute in terms of organisation.

ZeniMax is the parent firm of Bethesda, best known for the Fallout and Elder Scrolls games. Meanwhile, Take-Two is the firm behind Grand Theft Auto franchise creators Rockstar, who have been at the forefront of the ‘video games being the cause of violence’ argument since its inception.

The White House has declined to share who was invited to the meeting, but CNN reporter Jake Tapper leaked the expected full list of attendees on Twitter earlier today (below).

Expected attendees at POTUS meeting today to “discuss violent video-game exposure and the correlation to aggression and desensitization in children,” per WH pic.twitter.com/6y61gTYZbT

Alongside those that make the games we love, the meeting includes representatives from organisations that have blamed video games for gun violence in the past. These include the Parents Television Council founder Brent Bozell, and Republican Vicky Hartzler, who have had a strong stance on guns and violence in video games since the Sandy Hook shooting in 2012.

"As we continue to work towards creating school safety programs that protect all children, the president will be meeting with video game industry leaders and Members of Congress to discuss violent video-game exposure and the correlation to aggression and desensitization in children," a representative from the White House explained.

"This meeting will be the first of many with industry leaders to discuss this important issue."

The leaked list is heavily in favour of those that want harsher restrictions on media rather than changing the gun restriction laws. It does not contain many so-called ‘industry leaders’ that are able to fight in favour of video games. For example, companies such as Activision, Ubisoft, EA, Microsoft, Sony and Nintendo are missing from the table.

PCGamesInsider.biz has reached out to The ESA to see why the number of publishers attending is so slim.

President Trump previously made this statement when talking about how he believes video games need a rating system, ignoring the fact that America has had just that in the ESRB since 1994.

The ESA has many reports and facts on its website to try and get the true facts out about video games that refute the negative claims. On their website they have this to say:

"Facts, common sense and numerous studies all refute the claim that there is a link between video games and violence. Blaming video games for violence in the real world is no more productive than blaming the news media for bringing violent crimes into our homes night after night."

Meanwhile, the International Game Developers Association has said it will refuse to let video games be the scapegoat for America's on-going issues with gun violence.