Riot Games is releasing a League of Legends spin-off project 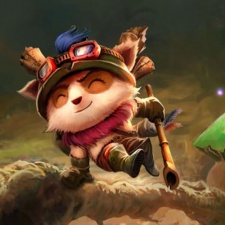 It would seem that Riot is working on something other than League of Legends.

As pointed out by Niko Partners analyst Daniel Ahmad (below), a new project from the studio called Teemo's Adventure has been given the greenlight for sale in China.

Teemo is a League of Legends character who is famous for annoying his opponents into making mistakes and thus letting him win.

Ahmad points out that the game is set for PC (we'll take his word as our Chinese is somewhat rusty), while Chinese tech and entertainment giant Tencent - which owns Riot - is publishing the project.

Whether this is the project that Riot's founders are working on having moved back to development in October, though that's only a few months ago so the odds are against this being true.

Not sure if Western media is reporting on this yet.

Looks like a game called "Teemo's Adventure" has been approved for sale in China. Riot Games is listed along with Tencent as the developer / publisher.

It's going to be a PC game apparently.

Teemo is a LOL champion. pic.twitter.com/5cVLWvkuex