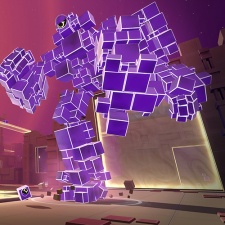 The Newcastle-based developer that brought us Grow Home and Grow Up is making a brand new game which will be available next week.

Titled Atomega, this latest release from Ubisoft Reflections is an online first-person shooter where players have to gather blocks of material in order to grow into bigger creatures.

In a trailer (below), players are seen expanding from single block entities to giant dinosaur and robot-esque creatures.

The game supports eight players per ten-minute match, with Reflections boating that it is ‘easy to pick up but hard to master’.

Furthermore, the title is set to launch next week, on September 19th, digitally.

This is the latest project from the incubator at Ubisoft Reflections that developed 2015's Grow Home and its sequel, Grow Up. Those titles were met with critical acclaim upon release.

They sit alongside other Ubisoft projects like Child of Light and Valiant Hearts, where the French publishing giant allows small teams to do esoteric and creative releases, with some comparing these titles to those of independent developers.